Much Too Much to Munch 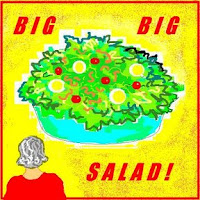 I have been concerned lately by the HUGE amounts of grub piled on the plates of diners-out here in America. Today, after our storytellers' meeting down in Wilmot, some of us adjourned to a local Amish restaurant, a touristy place full of very large people lining up at the trough. I ordered a simple chef salad and was shocked when the server delivered this enormous bowl, filled with about a half-gallon of lettuce and fixin's. There was enough for about three people, and had there been a few empty bowls on the table I would have insisted that the others partake. They, however, were trying to cope with their own loaded plates. I ate about a third of the salad and brought the rest home.
This is not unusual, especially in this part of Ohio. I see many people walking out of restaurants these days bearing Styrofoam boxes, straining with the weight. I had dinner at a place a few weeks ago on their Chicken Marsala night. What I got was a platter - a platter! - with a whole chicken breast, an Everest of garlic mashed potatoes and about a half pound of mushrooms, swimming in brown gravy. I mean, throw in a couple of legs and wings and you've eaten an entire chicken all by yourself. Who could eat all that? Why would anyone eat all that? Then they come around and ask if you want dessert! On the dessert list there is always a chocolate brownie with ice cream amd chocolate sauce. And there are takers! After eating an almost whole chicken!
Ohio is one of the most obese states in the U.S. of A. If you watch TV commercials for those chain restaurants, you see what I mean, and they're proud to say, "All you can eat." Maybe Ohio is the only state where these commercials are run. Maybe in other states when you order a chef salad, you get one you can eat in one sitting.
Here's a good site to see how Ohio feeders end up:
http://www.scribd.com/doc/2359392/What-Celebrities-Would-Look-Like-If-They-Moved
Posted by Guenveur in Kent at 6:06 PM

I have seen that slide show, however, they were using Berks County, PA as the relocation destination. We have BIG people in this area of Pennsylvania...and when they say "all you can eat", stand back!

I was at the Riverfront Irish Festival in downtown Cuyahoga Falls yesterday and honestly, between that and the Portage County Bicentennial Festival earlier in the week, I have never seen more morbidly obese people in my life! And all that bad "festival food" being consumed by them, like corn dogs, pizza and other fattening foods is not helping the situation any. And folks wonder why health care costs so much lately? All you have to do is to look around at all the fat people everywhere you go and the question answers itself.

I live in Ohio too, and just have to laugh at those Mcdonalds commercials about the 1/3 pound hamburgers - we have to eat them so they will roll out the product to the rest of the nation. Ridiculous!

The mister and I order one meal and divide it in two and then take the leftovers home for lunch the next day. I thought the pictures of the celebrities made them look healthy and like people you'd like to know.