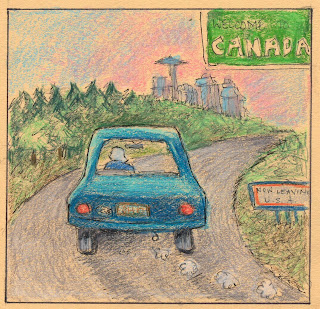 Tomorrow is the big day for all of us here in the United States of America (which all of the candidates keep calling the country we live in, with emphasis on the last two letters, like KAH!) I am leery, having been down this road so many times in the last 40 years. I was thinking today of all the times I swore I would move to Canada in the various election years: Both times that Nixon was elected, both times that Reagan was elected and both times that Bush II got into the office of President (of the United States of AmeriKAH.)

The media, the current villain of all of us in AmeriKAH, is giving the election to Obama, which I find worrying. There are people, among the undecided (Who are those people and where have they been for the last year and a half - or for the last seven years?) who might figure that they might as well not vote at all, or vote for McCain, figuring they want to make him feel good. I don't trust undecided people to make good judgements at this point in time.
I worry that all that early voting will somehow screw things up. Since I live in a small precinct, I have no problem voting on election day, because it is rarely crowded, so I can understand those who live in big cities who may have to wait in line forever on official election day. However, there have been waits of up to an hour in the early voting areas, so I don't know what the point is. In our county they are not using paper ballots, so that isn't an issue here.
What the current administration has done to this country in the last seven years has created the most dangerous time in which I have ever lived. It is hard for me to believe that anyone can think that we need more of the same.
As for McCain's choice of a vice presidential candidate, I agree with Colin Powell that it does call into question his judgement. I am astounded that people think she is capable because she is "just like us." I don't know if the people who say this think themselves capable of dealing on a global level with other world leaders and the many problems of planet earth, or if they are just too dumb to understand that we are not considering a race for the student council president's office.
Tonight (Monday) I'll be watching NBC's Saturday Night Live Presidential Bash for comic relief. Tomorrow morning I shall vote for Barack Obama and every Democrat on the ballot. Tomorrow night I shall go to a movie and not turn on the TV or radio until Wednesday morning. No matter what, I'll probably not move to Canada once again.
Posted by Guenveur in Kent at 4:54 PM

I, too, have threatened repeatedly to move to Canada. This election has me nervous as a cat in a room full of rocking chairs. I will vote at the crack of dawn and then hide my head in the sand until Wednesday morning!