Words the Sisters Taught Me 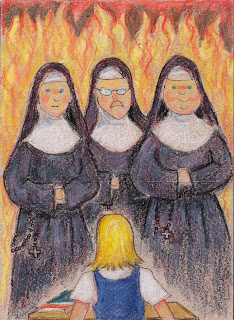 I was thinking recently, apropos of nothing , about the words and concepts introduced into my very young brain in elementary school some 74 years ago at St. Anthony's School in Atlanta. At the end of second grade, having arrived at the Age of Reason, we were prepared for our First Communion, preceded by out First Confession. We had already been apprised of the concept of sin, both Mortal and Venial. We had studied the Baltimore Catechism: Q.Who made you? A. God made me. Q. Why did God make you? A. To love Him and serve Him ...and so on and so on.

These questions and answers got more complicated as we made our way through succeeding grades, with very long answers to very complex questions, most of which were forgotten as soon as the answer had been memorized and parroted back to Sister Mary Frantic, et. al. We had to memorize the Ten Commandments and the Seven Sacraments, but not the Seven Deadly Sins, mainly because I don't think the nuns particularly wanted to have to explain Lust. It was bad enough getting past Adultery really fast before some smart ass kid blurted out a detailed explanation. Then there was a mysterious thing called Impure Thoughts, which had no meaning until we reached the Age of Lust much later.
I'm not sure how the Church (all these things must be capitalized by order of the Papal Nuncio, whoever that is.) came up with the idea that seven was the Age of Reason, but pounding these heavy concepts into my head at that age caused such confusion that I was sure having a book overdue from the library was some sort of sin. Now, Mortal Sin meant that if you died with one on your Soul you were going straight to hell, not passing Go, but directly. Mortal Sin was, like, killing somebody or missing Mass on Sunday. Venial Sin, on the other hand, well, you would not go to Heaven, but Purgatory, a sort of mini-hell. However, there was a system involving Indulgences, Partial and Plenary, which meant that the folks you left behind could have masses said, or pray for your Immortal Soul, until you had accumulated enough Indulgences to get you out of there and up to heaven where you probably should have gone in the first place, being only human. While you were alive, that is.
Along with regular Sin was the Occasion of Sin, which one was to avoid. There was even the Near Occasions of Sin. We just figured out that meant you were standing next to your sister when she talked back to your mother. (Talking back to one's mother or lying were the main sins of childhood. How bored must the priests have been in the confessional!)
At least we were picking up a rich vocabulary, even though there were few opportunities to show off our superior linguistic skills to our neighbors, who went to the Protestant School (which is what we called public schools). Words like Partial Indulgence could not ea sly be worked into a conversation about whether to play hopscotch, Red Rover, or Mother, May I? We used to think that Protestants were lucky that they didn't have to worry about sin. They were doomed anyway, since they didn't belong to the True Church.
One thing about growing up in Catholic schools is that one has a hodge-podge of confusing religious concepts. Not the nuns fault; I just never reached the Age of Reason by their standards. They were just trying to keep us from going to hell, after all.

Posted by Guenveur in Kent at 7:13 PM

Ah, yes, I remember those days from St. Patrick's when the nuns tried to teach us the same concepts. It was all very confusing to a child's brain to try to figure out what all of that mumbo-jumob meant.

Oddly enough, though, a lot of that stuff stuck with me over the years. Lying is still something that I consider the highest sin of all...but then, there are "white lies" and then there are the really bad lies, so....what's the difference? I truly don't know, but I know that when I perceive that I have been lied to or about, it really sends me over the edge into a real rage, but then, isn't getting angry at someone a sin as well?

No wonder I am a Unitarian Universalist now. I don't have to think about such things like that anymore. But I still do. So maybe it's true what they say, "Once a Catholic, always a Catholic!"