My Country 'Tis of Thee 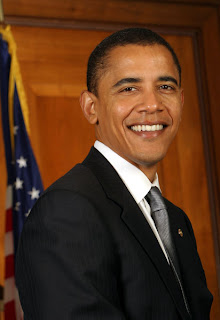 Well, I didn't go to a movie. I didn't turn on the TV, but I had left the radio on after "All Things Considered" and let it play. I started fooling around on the computer when they started talking about the map you could follow as the state returns started coming in. So I sort of followed along with side trips to YouTube and FaceBook. As some of the states turned blue, I kept myself from jumping to conclusions. A little after ten o'clock, when Ohio turned blue, my phone rang. It was Emily in Germany, where it was 4 a.m.

"Can you believe it?" she cried. "I am so thrilled!. We have a bottle of expensive Champagne chilling in the refrigerator which we're about to open. We're going to stay up for the acceptance speech, too. This is just great." The girls had already gone to bed, but were really interested in the ourcome.
It wasn't long before it had truly happened. Barack Obama is the new president of this country which is my country once again. I am so proud of us. I am so proud that people began to actually think about what this country needs and did not let racism interfere with their vote for the right man.
I went to bed, but not to sleep, because the phone rang again around 11. It was my friend Susan in Dayton.
"Can you believe it?" she shouted. "Obama made it. I am so relieved. I didn't think it could happen." I could almost see her jumping up and down. We exchanged mutual happy shock.
I drifted off watching my little black and white TV, and saw a bit of the acceptance speech. I watchd more of it this monring. It was so moving and even though Mr. Obama and the Rev. Martin Luther King are from a different era, there were echoes of that wonderful speech from 1963, which I can never hear without tearing up, in the words of the new young president-elect. Everyone I have talked to today has had the same sense, and everyone I have talked to has been moved to tears. Emily called again today and she said that she and Chris were both crying as they watched the speech. Emily said that she saw on TV a German waving an American flag. They are wild about Mr. Obama over there. The Europeans had written us off after the incompetence and arrogance of the Bush years.
There are those who say that race should not be an issue here, but it cannot help but be. It's a landmark, a promise kept after centuries of limits imposed on Americans because of color. It's just plain wonderful for all of us. I hope that the Democrats keep a cool head and do not act like Republicans in Congress. We've been given a gift, which many people worked very hard for, and I hope we use it well.
Posted by Guenveur in Kent at 3:52 PM