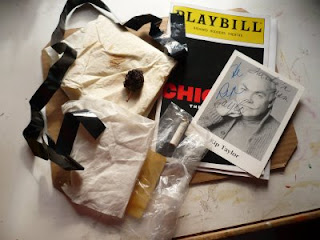 A number of years ago, my daughter Polly developed an idea about obscure connections to fame, spurred by the fact that the uncle of a man she was dating had invented the UPC, those little stripey things that are scanned whenever you make a purchase. This idea caught on with my family, and extended to anyone careless enough to have experienced such a connection. The obscurity can pertain to both an obscufre person who has done something noteworthy, or to whatever object or activity may be connected to a famous person. For instance, there's the wonan who had been thrown up on by Paul Lynde at a drunken football game at Northwestern. Another person was offered a joint by Jack Nicholson, a stranger to her, on a ski lift in Colorado. My son's girlfriend's sister's boyfriend, who is a leather worker in Kentucky, made the harnesses used in the movie "Seabiscuit." It can't be something as prosaic as "I met George Cloonery", but rather that you bought a second hand jacket in a Good Will store that George Clooney's' father had worn on a local TV program in Cincinnati in 1965. I don't know anyone to whom that has happened, but only offer it to demonstrate the limits.

As I have shared this phenomnon with people, I have gathered some really fine connections and it has even grown into the Burnell Museum of Obscure Connections to Fame, nade up of objects sent to me by enthusiasts. I have a dried up apple from the orchard of the writer and critic Edmond Wilson, who was at one time married to Mary McCarthy ("The Group"). I have toilet paper from the home of the late Norman Mailer. These came through the originator of Obscure Connections, Polly, who lives in Provincetown. I have a paper napkin used by Hal Holbrook, when he was appearing in "King Lear" in Cleveland, snagged from his table in a restaurant by daughter Emily. A Playbill from a performance of "Chicago" in New York that was taken from the seat occupied by Rex Reed was sent by friend and Obscure fan Chris Jehle. Chris also sent me the picture of Rip Taylor. What makes that a worthy entrant is that Chris and his partner were walking on a beach in Hawaii, encountered Taylor, asked for his autograph (for my museum) and Taylor already had on him a pack of autographed pictures. On a beach in Hawaii!

The prize of the collection is a cigarette butt, dug out of an ashtray by our friend David C. Barnett, who interviewed Joe Esterhaz on the Cleveland NPR station when Esterhaz was in Cleveland for the opening of his movie "Telling Lies in America." He refused to put out his cigarette for the interview, telling David, "no cigarette, no interview." This butt is a trifecta of sorts. A few years later, Esterhaz developed throat cancer and was interviewed by Terry Gross to talk about the dangers of cigarettes and his battle with cancer. Then, recently he was on some NPR show talking about how his bout with cancer and his recovery had led him to become - A BORN AGAIIN CHRISTIAN! So, this butt has a lot going for it in the obscure connection story. David is also responsible for the piece of video tape, which he clipped from a videocassette of "Freebie and the Bean," which came from the estate of Sammty Davis, Jr. "Freebie and the Bean!"

I met a woman who had dated the son of the woman who does the "Find the hidden object" pictures for Highlights magazine. But the very best of all the encounters related to me came from my brother Mike. Several years ago, he was walking through the hospital where he gave people new hips and knees, and met a colleague who had just returned from Poland. This doctor was a proctologist. He held up his forefinger and said to Mike, "Touch my finger." Well, one hesitates to touch the forefinger of a proctologist, doesn't one? So Mike hesitated. "Go ahead," the man repeated. "Touch my finger." Reluctantly, Mike did. "You have jut rouched the finger of a man who traveled to Poland specifically to give a rectal exam to the Pope's confessor!" he proudly exclaimed. So that is one of the best of all obscrue connections. Not the Pope (the late John Paul II), but his confessor. There may be other Obscure Connections to Fame out there. but this is the absolute best.
Posted by Guenveur in Kent at 1:27 PM