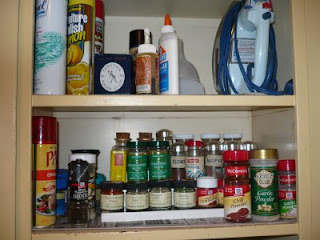 There are many boring and odious tasks involved in running a household. Boring: making beds, vacuuming floors, dusting, thinking about what to have for dinner, shopping and most things involving the kitchen- except for eating (I have no dining room.) Odious: garbage stuff, floor scrubbing, toilet cleaning, and sometimes laundry. Of all these mundane activities, one that I manage to avoid most of the time is the cleaning of kitchen cupboards. A number of years ago, when Emily was home for a month before moving to Germany, she had organized all my cupboards beautifully. It pays to have an anal retentive child. Alas, that's never happened again during her subsequent visits.

I have a very small and inconvenient kitchen. My son calls it a two-butt kitchen, meaning that no more than two people can work in there at the same time. I have very little storage space, so that most large portable appliances (bread machine, food processor) have to stay down in the basement until needed. What cupboards I do have are pretty packed, to the point that things fall out occasionally when the doors are opened. The worst of this sort of thing is when something falls out into the cat's water bowl. That particular place is the only place there is room for the cat's water bowl, or I'd move it. It happens to be under the spice cabinet, which is in frequent use.
The other day, I decided that perhaps if I cleaned out a few cabinets, especially the one with the spices in it, I would probably be able to throw out some stuff, since I had been just stuffing in things for quite a while now, and that this might mean more room in there and that maybe things would not fall into the cat's water bowl so often. Also, a new Penzey's store has just opened near Trader Joe's and I had bought some and felt that my spice cupboard was entirely unworthy of it.
Being a recycler, even before global warming, I have always used newspaper to line my shelves. This has the disadvantage also of letting me know just how much of a slob I am, because of the dates on them, you know. The first cupboard, a really difficult one, since it starts on the floor level, which is a really hard thing for a person of advanced age and creaky knees to maneuver around in, had papers dated from 2005, which is, in all, not too bad - at least it was in the current century. I managed to throw a huge amount of unused stuff away, and even had room for some new big soup bowls I bought recently which had had no place to go until now, and had sat forlornly on a counter top. The cupboard now looks stunning inside.
Next came the spice cabinet. Oy weh! I had moved the cat's dishes away (Dupree had just started his 12 hour nap and wouldn't be around to fuss about it) but nothing fell out. I discovered that I had three containers of cumin, which only gets used when Emily visits, two of coriander (ditto for Emily) and a lot of unidentified dried up stuff. The newspaper in that space dated from 2003 - again, in the current century. I tossed, I scrubbed, I replaced the newspaper with a few pages of a current edition of the Akron Beacon Journal sports section. The shelf above it contains a miscellany of things - Gorilla Glue, Elmer's Glue, silver polish, furniture polish and my steam iron which I haven't used since that last century. I threw a few old things out of that one, too, and now the whole thing looks stunning inside.
The thing about cleaning cupboards is that nobody can see the splendor of what one has done. I always have to fight the urge to run out into the street and invite the neighbors in to come in and see what I have wrought, and I would be willing to go look at theirs when they have done the same. It's such a thankless job, isn't it? Then I realized that I have this blog and I can show it to whoever chances to drop by. I didn't take pictures of all the cupboards, just the spice one. In an informal survey, I have discovered that it is everyone's nightmare, except for those rare neurotic perfectionists who probably have their spices alphabetized. If I knew one of those, I would invited her over next time, say in a few years.
I think I should mention that I finished radiation treatments yesterday. I shall miss the candy dish in the waiting room.

Posted by Guenveur in Kent at 2:14 PM

Guenver, I love your cupboard! It's REALLY neat and well organized.

If you want someone to stop by and oogle your cupboards, just gimme a holler when you see me outside digging in the yard!

I'm so happy you are done with radiation. That has to feel great! Hell, you can buy your own candy!! ;)

Hmmm, my word verification word is myrocks! Makes me laugh!!

Well, Ma, your kitchen is bigger than mine, which on a good day is about a "half-butt" kitchen, meaning that one very skinny person can work in there at best, and I have almost no cupboard space, meaning stuff gets put wherever I can find a spot for it.

I wish Emily were around to organize MY cupboards...and my kitchen....and my bedroom....and my entire apartment, for that matter. I'm sure she'd clear this place of about 90% of the clutter currently taking up unnecessary room, but then, when you aren't working a demanding full time job and commuting an hour a day on top of it all, you have the energy to do such things......

Word verification: ingst - What I feel right about now thinking about how much cleaning I lack the energy to do around here......

I guess since I've had kids, I've lost my desire to clean other people's places, even my beloved childhood home. However, perhaps when I come this summer, I can work on it, and even tackle Sally's place. At any rate, congrats on the accomplishment of getting that kitchen in order. It is such a satisfying feeling. Ordnung muss sein!