More Attention Must Be Paid 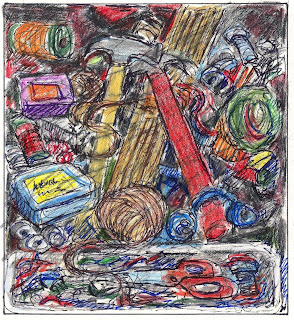 I'm not sure what's gotten into me, but it might have been a cartoon by Roz Chast in the New Yorker a few weeks ago. Her work manages to parse the fears, guilt and angst of the average semi-neuritic that I am on occasion. This cartoon began with a woman looking with disgust at her butter dish and thinking that she should probably wash it. In the succeeding panels every item, every piece of furniture, every window, every book, etc. began to complaint that they, too, were dirty, messy, dusty, awful. She looks again at the butter dish and says that she might as well buy a new one. The butter dish replies that she'll regret it.

Of course, I found this very funny, but apparently, my cupboards were shouting at me in some subtle way that took a couple of weeks to reach me. This time I tackled the gadget drawer and the hell drawer. The hell drawer is full of stuff collected from other drawers where the stuff just doesn't fit , or because I don't know what else to do with it. It is hard to open, of course, and it there is something there that I need, it takes a lot of fussing and cussing before I can find it. This time I was determined to get serious and make some choices that would thin out the clutter.
How many twist ties do I really need, for instance? Why had I saved them? How many paint can openers do I need? (I had to ask John what they were.) How many decaying rubber bands? What are all those loose screws for? Why are there so many Phillips screw drivers? Why am I saving that stupid little functionless set of screwdrivers in the cute plastic container which I bought from some school kid as a fund-raiser for a new playground? (That school kid probably has school kids of his/her own, or maybe even a few college graduates by now.) What is this thing? Why have I kept it? This ball of hemp twine looks as if it's been smoked and it's sticky, too, but with what? Why do I have three coils of wire? Dirty plastic tape of some kind? Ah, there's my little tape measure which 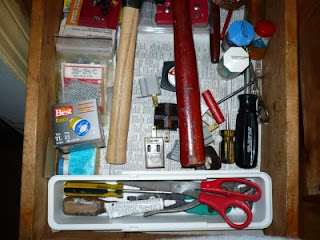 I haven't seen for years!
I was ruthless and recycled some and tossed most of what was, basically, trash. Once again I need to share this marvelous result. Should I send this to Roz? I'd hate to make her feel guilty, though. After all, I do have two butter dishes and once in a while I switch them.
P.S. Perhaps the most important object in here is/are my red-handled scissors, frequently miss placed by persons unknown when all my children were living here. Now the children are gone, and the scissors safely dwelling where they belong. I wonder if the adult children can a still hear my frustrated cry, "Where the hell are my red-handled sciossors?"
Posted by Guenveur in Kent at 9:38 AM

Ah, the twist ties! Joe once brought me an immense pile that he'd retrieved from the wrap drawer in the kitchen and said simply, "Nancy, these are NOT one day going to be valuable. I'm throwing them out." He did and I think he was right, though I'm not yet positive.

WV: maerbou, a boa worn by an individual whose jaws are wired shut

I have my own version of the "Where in the hell are my red handled scissors?" It's Scotch tape (or "sticky tape" as my Australian husband calls it, or "Tesa" as the Germans call it). Even though I bought both kids their OWN little tape containers for their rooms, they ALWAYS take mine and I find myself screaming in frustration when I reach for it and it's not there. It's in a hell drawer of its own, which I should tackle myself one of these days.

We always seem to have a dozen flat-head screwdrivers around but can never find the phillips... perhaps they've migrated east? (from California) Would you consider setting up a hostage exchange?