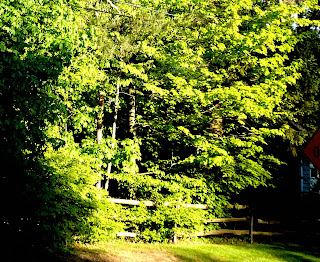 This is the month when northeastern Ohio turns brilliant green. It's a beautiful time of year, especially when we've had one of those really bad winters with too much snow and too much grayness.

Here in Kent it's also a time when we remember the tragedy that hit this place in 1970. There was all this beauty in the town and on the campus: the flowering crab apple trees lining my street in full bloom, lilac bushes sending out that sweet scent of spring, golden dandelions sprinkled through the new grass. And then there was gunfire on the campus and four young lives were snuffed out and nine other students were wounded, their lives changed drastically. It was a terrible time for the university and the community, which divided us all for years. The university's response was craven: there was no expression of outrage that these students were shot on their own campus, rather a rush to "put this behind us and move on.". The community's response was outrageous: "they should have shot more of them,they brought it on themselves."
I don't want to over simplify the complexity of the events that led up to the shootings, but I found the response to the deaths of those children hard to deal with in the months and years that followed.
This year we observed the 40th anniversary of what happened on that beautiful spring day. The ground on which the confrontation took place between unarmed students and the armed National Guard (most of whom were the same ages ad the students) has now been designated a National Historic Site. The living parents of the four dead students attended and spoke about their struggle to heal. Several of the wounded students spoke, as did a number of national figures I didn't go up to the Commons for the ceremony because I don't think I could do that much walking yet, and I have been to many of them over the past 40 years. Joan Baez, Judy Collins, Crosby, Stills, Nash and Young, Peter, Paul and May, Jane Fonda (in her post-Barbarella and pre-Feel the Burn incarnation) are only a few of the celebrities who have appeared over the years on the Commons to help us observe this event.
It is always a sad occasion in the midst of the blooming of the green, green spring. I was asked recently what I think we have learned from this. My answer was, "Nothing, apparently."
Posted by Guenveur in Kent at 3:25 PM