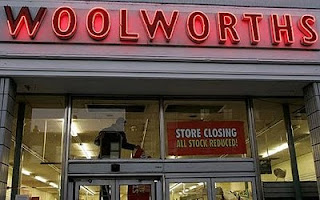 I want my dime store back. That's where I used to do m y Christmas shopping. I would have 50 cents to buy gifts for the entire family, and I would get wonderful things for them there. I remember the pseudo cloisonnne incense burner I bought for my mother one year. It was orange and green and brown, with gold beading, and I thought it was beautiful. I don't think we had any incense, but that didn't matter. To a seven year old it was magical. I bet if it was on "Antique Road Show" now, it would fetch a pretty penny. Woolworth's was full of bright, shiny things, which was what Christmas was all about. In those days, there were tons of things that were actually five or ten cents in price. I think that incense burner was a whole quarter, which meant that the other family members got lesser treasures. You could also find great wind-up toys, little china dolls or animal families, tops, marbles, Big Little books, and all those things that no longer exist in the world of children, so are not missed.
These stores were still around when my children were little, and that's where they shopped at Christmas, too. I still have a few things they bought down at the Woolworth's at University Plaza years ago, like a gold-sh locket , in which I put their pictures, and a necklace with a big "G" on it. Never go me a fake cloisonne incense burner. I think they had better taste, or figured that I had.
Even when prices rose above 5 and 10 cents, dime stores were great places to find simple things: dish towels, kitchen gadgets, gold fish and turtles, coloring books and paper dolls. What reminded me of this is that yesterday, John decided that we should make gingerbread men. I had tossed out all my cookie cutters years ago and I realized that there was no dime store to go to to find a new one. All of that stuff is now relegated to specialty kitchen stores, which carry over priced gadgets for people whose hobby is cooking. Coking as a hobby! What a concept.
The same thing happened a few years ago when I broke my glass juicer, a simple reamer I had had for 40 years or so, which I had probably gotten at Woolworth's, along with a spatula or a slotted spoon. I went to the only outlet available to me - ugh - Walmart - which had destroyed the local very fine Kmart, which was a really good substitute for the old dime store. In fact, I think Kmart is descended from the old Kress' (in the South) or Kresge's in the North. So I'm at -ugh- Walmart, and I ask where the juicers' are, and the guy led me to the housewares department and shows me this cheap plastic thing. I said, "But I want a glass one like the one I broke. I'd had it for forty years." He smiled and said,"You 'd had it for forty years or more. That's exactly why they don't make that kind any more." So I ended up finding one at an antique store, and I treat it very carefully.
So, anyway, there was no handy Woolworth's, McCrory's or Kresge's to go to to find a gingerbread man cookie cutter. As I was on a bit of a journey to find a gift, I realized that I was going right by one of those complexes (Aurora Farms)which has tons of shops, including a couple of kitchen ones, I drove around and found a parking spot not too far from one of them, went in , asked a lady in an apron if they had such a thing and they did. It wasn't even expensive. It wasn't exactly the shape I was looking for, and it looked like a person of indeterminate sex, but a person for all that, so I bought it. Since I wasn't in a dime store, there was really nothing else to look at except that they had tons of sample's of their specialty dips, so I grazed thorough a number of them and left. When I got home, I discovered that John and Polly had found an almost identical one, even cheaper, at another kitchen shop in Hudson, a very posh one that offers gourmet cooking classes for those for whom cooking is a hobby instead of a *&#$@% chore that you have to do every day.
But I digress. Had there been a Woolworth's handy, it would have been so much more fun and lots more things to browse. I used to buy a very fine journal there every year until they closed. No one else has them, so I don't even keep a journal any more. There were still Woolworth's in England , at least a few years ago in Scunthorpe, where I bought a very fine tea cozy. It was just like the ones we used to have here. Lovely. I always loved dime stores.
Posted by Guenveur in Kent at 12:30 PM

Downtown Kent had McCrory's and W.T. Grant. I spent MANY hours at those stores; yes, they had everything you could think of! McCrory's was where City Bank was, Grant's was next door, toward the old hotel.

I loved downtown. As kids we would walk there, shop at the 5 and 10 cent stores, get a nickel coke and 3 pretzels for a nickel at Thompson's Drug Store.

Those were the days!

Oh Guenveur, The last few years Don worked for the Bureau of Employment Services his office was actually housed in a great big Goodwill store in Akron. There he found me all kinds of treasures from somebody's grandma's house, things that were hard to find anywhere else.
I learned to appreciate the Goodwill then!

Guenveur,
On December 8th - the feast of the Immaculate Concepcion....a Catholic school freeday - Ed and I would take the bus down to Woolworth's and spend the whole day Christmas shopping. It seemed the aisles were long and packed with all sorts of very affordable things. We looked forward to stopping for a toasted club sandwich and chocolate milkshake at the lunch counter, and we'd agree to go our separate ways so's we could each buy the other a gift. By mid-afternoon we'd cross the street and wait in front of the Majestic News stand for the bus home. Once there, we'd stash our presents up in our bedroom and then wait the eternity until Christmas day.