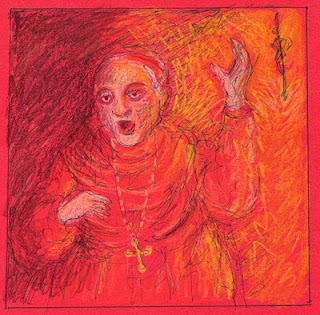 This is not about a Monty Python skit, although I half expected Terry Jones to appear when one of the characters sang this phrase twice - in Italian, which I don't understand, but there were subtitles. I went to see "Don Carlo" on Saturday, the live from the Met HD version. It's the reddest opera I've ever seem. The set and costumes designers went a bit too far here with the most blazing shades if red in the spectrum.

The story is as follows: Don Carlo, the prince of Spain, is betrothed to Elizabeth, Princess of France, one of those deals they used to do with helpless royal offspring, where they'll meet for the first time on their wedding day. BUT - they accidentally meet in a forest, so they can sing a duet and fall in love. Their countries are at war, and unbeknown st to them, Carlo's Pa, Filippo, decides that HE wants to marry Elizabeth, as part of a deal to end the war, the bastard! A side story involves Carlo's BFF Roderigo, who's a baritone, so that he and Carlo, who's a tenor, can sing a really great duet professing their BFF-ishness, and they hug a lot during this number and swear their undying love and all, and you start to wonder. Roderigo goes off to help the Flemish (at least the people of Flanders, and I don't think they're call Flanderish) and asks Carlo to ask his Pa to call off his Spanish conquerors and leave the Flanders folks be.

Well, there's a lot of singing and all, and there goes Elizabeth walking around in very red clothes with Filippo,m who's also clad in crimson, and Carlo, in black as befits a heartbroken prince, weeps and moans like a bastard. This is 16th century Spain and the Inquisition is still the main hobby of the Church, and when Roderigo comes back from Flanders and confronts Filippo about his unjust war on Flanders, Filippo tells him, "Beware the Grand Inquisitor!" Since the Church pretty much ran the world in those days, if you piss off the king, you're dissing the Church, so you'd better beware the Grand Inquisitor and all

So there's this scene with Filippo singing this gorgeous aria, about how Elizabeth never loved him - duh!- an he makes a deal with the G.I. to turn his own son into the Inquisition, along with Roderigo. At least I think that's what the deal was. Anyway, Roderigo gets shot during an Auto da Fe, with people getting burned all up behind a huge scrim with the face of Jesus on it, in case you didn't get the irony. Carlo cradles Roderigo in his arms. Roderigo singes "Morire" or something like that which means "I'm dying here, but first, I'm gonna sing ya a little tune," which he does, a very beautiful aria and all He's singing this while lying on the ground with this huge starchy collar almost covering his mouth. He dies, finally A few minutes later, Carlo gets stuck with a sword by somebody I didn't know, and the ghost of his grandfather - Filippo's father- takes him away to Paradise, where Roderigo awaits! And Elizabeth is left with Filippo, the bastard.

It's a five hour opera and the best music is in the last act, and I enjoyed the whole thing Those wacky royals and priests! Those folks who want a theocracy should check out this opera.
Posted by Guenveur in Kent at 5:45 PM