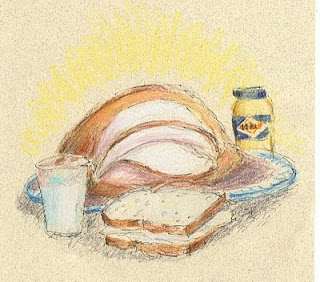 The best part of Thanksgiving, for me, are the days after, when fine turkey sandwiches are available until there's nothing left but the carcass. The perfect turkey sandwich is made as follows: white bread, mayonnaise, white meat with a sprinkle of salt, accompanied by a glass of cold milk. I have done this with whole grain bread, dressing and cranberry sauce, but this year the dressing was so good we ate it all on Thanksgiving Day, and the cranberry sauce didn't jell properly, so I'm back to the traditional as described and pictured above. John and I went up to the West Side Market Saturday and bought some wonderful Hungarian crusty white bread, which makes the ultimate old fashioned turkey sandwich. By the way, I think the dressing was so good is that I was out of sage, so I went out into the garden and picked some parsley, rosemary and thyme and used that instead. Excellent.
I spent the first half of my life (so far) under the Catholic church's ruling of no meat on Friday. This meant agony on the day after Thanksgiving, with the turkey sitting in the refrigerator, exuding all its roasted turkeyness, untouchable. If I spent the day with non-Catholic (that's how we described those not lucky enough to be born into the true religion) friends, when their mother would get out the turkey and slice off those luscious pieces of white meat for luncheon sandwiches, I had to eat peanut butter and silently offer up my suffering for the lost souls in Purgatory, as the nuns often advised us to do when in pain. Or I could just curse my ill-born religious luck. We'd stay up until Friday midnight, and as soon as the minute hand moved past twelve, we'd all race to the kitchen and attack the turkey, scarfing it down like those poor starving children in China we were always hearing about.
The irony of all this was that, if we went to Mass on Friday, we could partake of the body and blood of Christ, which if you believe in Transubstantiation, which we' re bound to do, we were eating meat, or flesh and blood, actually. Whichever pope infallibly made up these rules was not much of a logician. I asked our parish pries about Transubstantiation once, asking if it wasn't meant to be symbolic, and he said that it was one of the basic tenets of the Church. In fact, I used to lead the congregation with my guitar in a jaunty little song with the chorus, "Eat His Body, Drink His Blood, Allelu, allelu, allelu!" Well, both the priest and I left the church soon after, he to marry an ex-nun who looked like Elizabeth Taylor at her most gorgeous, I to become pretty much a Druid, never more to urge people to participate in cannablism. Then Pope Juan Two Three opened the windows of the church to let in some 18th century air. and we started having hamburgers on Fridays, and turkey on the day after Thanksgiving, the day that merchants call Black Friday. Yes!
Posted by Guenveur in Kent at 3:08 PM

See, Ma, how not liking meat as a kid spared me that whole "no meat on Friday" agony? Never had to worry about it, not once. Well, OK, so I could not have bacon with breakfast, but I could still have a bowl of cereal and a glass of orange juice and be quite happy, or a PBJ sandwich in my lunch any day of the week and be a happy camper, never to worry about an accidental bologna sandwich in my lunch on Fridays. So there was some virtue growing up Catholic and not liking meat!

I so well remember you on the guitar doing "Eat his body, drink his blood ... and we'll sing a song of love, Allelu Allelu Allelu-ooo-ya!" I have an LP of folk Mass songs that I listen to sometimes while I iron, Talk about a blast from the past. -- Roger J.