Messing Around in the Museum 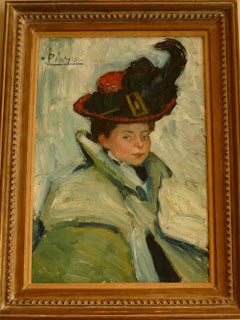 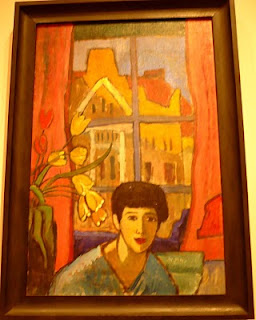 I just finished an 8 week class (one a week) at the Cleveland Museum of Art, called "Drawing in the Galleries." We started out with five students, but ended up with only three. We began in the Rodin Sculpture Gallery, which is located in a new part of the museum; it's basically a glass box, so the lighting is perfect. Unfortunately, their Rodin collection is not particularly distinguished, but it was a good exercise to begin with, if a tad boring.

We worked with charcoal the first two sessions, working in black and white to get a sense of values. Since most of the time we were in the new East Wing, we were only allowed to use pastel pencils. Before all the new construction, students were able to bring in paints and regular pastels, but now everything is so new and shiny that such messy media are verboten.
We drew in the Egyptian exhibit, the African exhibit, the Impressionist gallery, the Post Modern gallery and the American Impressionist gallery. Along the way, we had to do quick timed drawings of some sculptures by various artists. I think we all liked the more modern galleries best, although the instructor had promised us the Dutch Masters, too, but we never got there. There's a Franz Hals there that I wanted to try.I discovered a Gabriele Munter which I'd never noticed before, so I did that one. I don't know how long they've had it, but I was glad to see it.
At the end - yesterday- we had a general critique and the instructor chose several of our things to hang in the student gallery, just down the hall from the classrooms in the education wing. But it's a hall which visitors to the museum have to pass on their way to the main galleries, so we can all say that we have work at the Cleveland Museum of Art. Mine are a drawing from the Degas "Frieze of Dancers" and an African mask used in a circumcision rite. Needless to say, it does not portray a happy face.
Above are the originals of the Gabriele Munter painting and the Picasso from the museum and at the bottom are my copies, more or less. You can see that even copying what you see, it's the real artists who knew what they were doing. 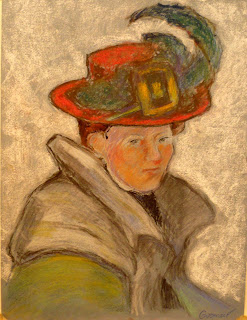 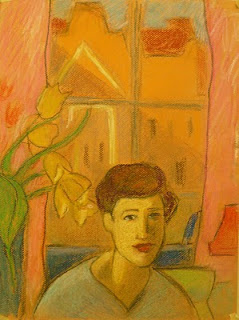 Posted by Guenveur in Kent at 4:30 PM

Wow! Apart from that, I think you should try to replicate that hat. You'd look stunning in it.

really interesting how your style overlays the original. I can see Guenveur in your copies. Congratulations to be among the 'hung' in this prestigious art gallery.