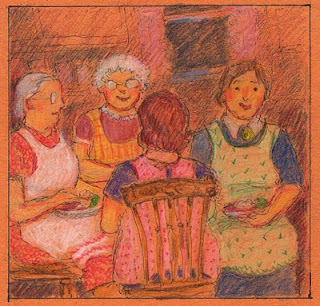 The other day, when I was checking out a bunch of candles for the Thanksgiving table, the check out lady mentioned that she was having 22 people for Thanksgiving. I told her that I would have to lie down with a cold cloth on my head if producing such an event were up to me. My parents had moved far away from their families, so we never had droves of relatives showing up for holiday meals, just our nuclear family of seven, which I think was quite enough for my mother. My job was polishing the apples and arranging the center piece fruit bowl, drapmg the grapes picturesquely. When I married and had my own children, we never went away to relatives' homes at Thanksgiving and that's the way it's always been.
I had only one experience with one of those large, extended family affairs. It was the first year we were married, and my husband and I went down to a small town on the Ohio River, where most of his aunts lived. They were all large women, named Frieda, Ernestine, Beulah and Genevieve. They didn't much like men, a consequence of their father , the local school superintendant, having left their mother in 1915 to marry his secretary and start a whole new family, none of whom were ever mentioned. They themselves had all married, presumably in order to have children, since there didn't seem to be much evidence of affection or even friendship between the spouses once they had each produced one or two children.
We met at Aunt Genevieve's big house, which contained Uncle Herb's general store and the village post office. When my husband and I went into the dining room, with its groaning table, I realized that I was the only woman in the room, among the silent and hungry men. "Where are your mother and the aunts?" I whispered to my husband. "Oh, they'll eat in the kitchen," he said. "They like it that way." Occasionally one of the aproned sisters would come into the room to see if we needed anything. I could hear them in the kitchen, laughing and chatting away, while I sat amongst the men who ate more food than I'd ever seen a human being put away. It was good country food, much of it home-canned. There was no turkey on the table; the women had sliced it in the kitchen and put in on the table in a huge mound on a platter. (My father had always carved the turkey; it was a guy thin in our family.) Needless to say, everything was delicious. But I muttered to my husband that there was no way I would ever eat Thanksgiving dinner in the kitchen wearing an apron.
When I went into the kitchen to help with the dishes, the women were all sitting around the large room on straight chairs, with their plates in their laps, gabbing and laughing. All of the men had left the table and waddled into the parlor to watch football. As soon as the kitchen was clean there came the request for some of that good pie and coffee, which the women dutifully provided on trays for the stuffed sports lovers in the parlor. (I could just see how my mother would have reacrted to these men: "You want pie? I'll give you pie!--Right in your face!") I have a feeling the air in the parlor was not too fragrant, given the amount of food and the speed with which it had been ingested. I didn't venture in, but went outside and had a cigarette with my husband. He had grown up with this holiday pattern and was a bit surprised that I found it strange. But I never ate Thanksgiving dinner in the kitchen on a straight chair wearing an apron. And men can get their own damn pie and coffee in my house.
Others in my family do the big Thanksgiving dinner and have a lot of fun with it. My brother Micheal and his wife have about 40 or so people, all relatives, and my sister Mary Lucille with just her kids and grad kids can add up to about 30 if everyone shows up. Everyone pitches in and nobody eats in the kitchen wearing an apron. We will be just four here, and that will be fine. After dinner we'll watch one of those movies we all love: this year I think it will be "To Kill a Mockingbird," which I'm DVR-ing tonight while I'm up in Cleveland seeing "Billy Eliot."
Good times.
Posted by Guenveur in Kent at 3:34 PM