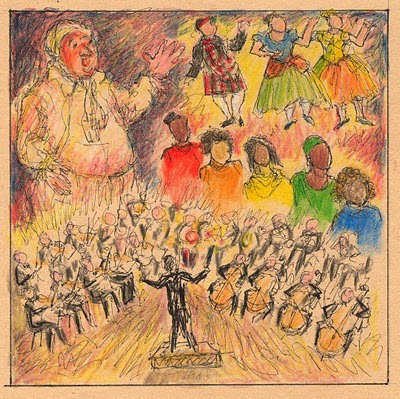 Every once in a while, there's a period of a few days when there are all sort of interesting things happen one after the other. This past week-end started on Friday night with the KSU production of "Brigadoon." Now this is probably the lamest musical ever written - and by Lerner and Loewe yet, the guys who wrote "My Fair Lady." I only went to see it because the university theater department puts on simply splendid musical productions - with the exception of that terrible "Jane Eyre" a couple of years ago. So off we went, not expecting anything too wonderful. BUT the thing was just delightful, thanks to the excellent dancing and singing, the costume design and the lighting. They even did a half way decent job with the Scots accent, usually the downfall of college productions. Way entertaining!
Saturday afternoon, a friend and I went to see "Don Pasquale," the latest HD transmission from the Met. A Donizetti opera, there was fine bel canto singing and a lot of cornball Italian comedy, with the diva a magnificent Russian, Anna Netrebko. I love these HD productions. Between the acts, you get to see them moving the massive sets into place by a team of some hundred stagehands. It was a fun comic opera and nobody died.
Sunday afternoon I went to see "For Colored Girls." I had seen the play years ago and just loved it. When I heard that they'd made a movie of it, I wondered how they would do that, since the play is basically poetry. I had also heard that Tyler Perry was producing it and he is the guy who dresses up as a bossy woman and that he had played the Chittlin' Circuit for years with comedies amid a the Black community. Since this isn't a comedy, I wondered what he would do with it. I must say he did a good job and respected the original work. This is not an easy story to watch, since it involves not only the impact on women of racism, but of sexism and violence against women as well. The cast is first rate, consisting of some of the best actresses in film and theater. It is certainly not and Italian comedy.
Sunday evening I went to hear the KSU symphony up on campus. The first piece was probably the most annoying music Beethoven ever composed. It was a triple concerto for cello, violin and piano and consisted of the same melody over and over again - not even variations, just the same damn melody in the first and third movements, with about ten possible endings that never happened....well, until it finally did after I had given up all hope of that happening. The players were great, but someone needed to tell Ludwig that it was really boring. Maybe he compose it after he lost his hearing and he didn't know he was being repetitive. The final piece was Brahms' 4th symphony, which started badly but ended perfectly. It was a fine evening.
So that was my week-end of music, drama and more music. So tonight I'll watch "Dancing With the Stars" and come down to earth. With a bang.
Posted by Guenveur in Kent at 3:47 PM

Well, you must be feeling better to have had such a busy weekend! Glad you were able to get out and about to so many enjoyable activities! Sounds like fun......