Poetry on the Cheap 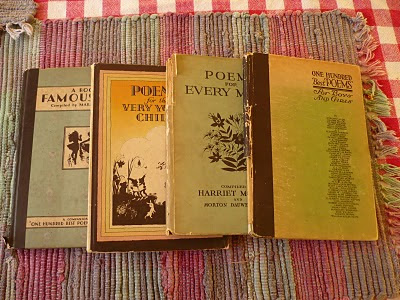 When my mother was growing up in the early days of the 20th century, one of her main pleasures was reading. Her own mother had always read to, and sung to, her children. There was a great library in their small New England city and my mother treasured the opportunity to explore the shelves and find books to enjoy.
When my mother was in her eighties, she received letter from a long ago play mate, someone she hadn't seen or heard from in probably 65 years or so. This woman had lived with her grandmother next door to my mother's family. Her father was a vaudeville performer, a widower, and often away on the road for long stretches of time. She was writing after many years, to tell my mother how much she had loved coming to their house, because there was a love of books and music, and that she had gotten her life long love of reading from listening to my mother's mother reading to her children, or anyone else who happened to be there. This pleased my mother n o end, and I thought it was just a fine thing to hear.
My mother took after her own mother, and when we were little, she would read to us every night at bedtime. She'd also sing us songs she had learned in her childhood.One of my favorite poems was "Winken, Blinken and Nod." A few years ago, I found a copy of the very Eugene Field picture book of poems from which she read to us. It has in it, "The Sugar Plum Tree," "The Calico Cat and the Gingham Dog" which she also read. The book has the most bizarre illustrations in it, which used to fascinate us, and finding's this book in a used book store, simply swept me away into the past.
One song that she sang was "Babes in the Woods," a terrifying tale of two little children who were stolen away on a bright summers' day and lost in the woods so I've heard people say. Well, they end up dead, of course. The tune is mournful and somewhat lugubrious, and we would wail and Mother would say, "I'm not ever going to sing that song again." I mean,, my sister and I were two little children! It was only a few years later, after we had moved to Georgia from New Jersey that the Lindbergh baby was kidnapped. In New Jersey! Anyway, a few nights later, we'd beg her to sing it again, she would, we would wail, and so on and so on. I think we finally got over it when we reached our teens.
When the Depression hit, we moved to Atlanta, where my father had been transferred by Fairbanks -Morse. In the move, we lost our "Winken" book, but mother found these fine little books of poetry in the dime store. These are not our original copies, but ones that I once again found in used book stores Again , looking at then is another step into my childhood. The poems range from Shakespeare to T.S. Eliot. They are amazing, given the general illiteracy of out current time. These little books probably cost all of 15 cents.
The ones for children have all the wonderful children's' poets of the time: Rose Fyleman, Rachel Field, Cristina Rossetti, Robert Lois Stevenson, Eleanor Fajeon, Edward Lear and more. Along with them, were Robert Frost, Yeats, Wordsworth, John Masefield and other poets who wrote so wonderfully about life and nature in ways that children could appreciate. There were quite a few poems about fairies. That would never go over now. I think today's kids would even let Tinker Bell die.
One little book that mother bought for herself had several poems that I liked to read because they made me sad: Poe's "Annabel Lee," a mournful tale of lost love- and death, and a truly heart-breaking poem, "Four Little Foxes," tiny newborn kits whose mother ..."Her feet within a trap, her blood upon the snow.." has left them shivering and blue with cold... I tell ya, it's unbearable! I guess I had a morbid streak at 8.
It's all about words and imagery, and all in these cheap little books with black and white illustrations!

Posted by Guenveur in Kent at 4:09 PM