I Hab a Bad, Bad Code 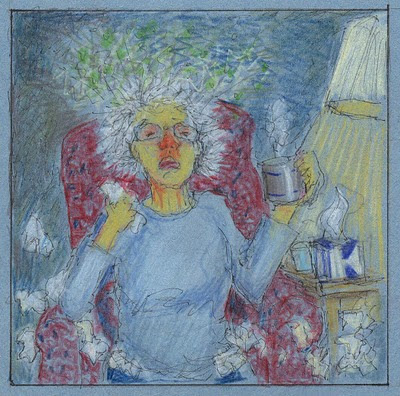 "When I was sick, and lay abed,
I had two pillows at my head .."
Thus begins one of my favorite poems from Stevenson's "A Child's Garden of Verses," a book my mother read to us when we were small. There is a wonderful illustration by Jessie Wilcox Smith, of a small boy lying in his bed, with a toy village placed her and there in his "Land of Counterpane." Oh, it is ever so cozy.
That's what it was like being sick when I was a kid. Oh, I didn't have a toy village, but there were books and crayons and no school. There was Campbell's chicken rice soup, soda crackers, ginger ale and Jell-o - and paper dolls. When I moved to the couch in the living room I could listen to the soap operas on the radio: "Vic and Sade,""Ma Perkins," and "Pepper Young's Family." Having a cold then was fun. Then.
Now it is a miserable, painful, messy, awful condition that seems to last forever until you can't remember what feeling well is like. The head aches, the nose hurts, the eyes burn and the sneezing and coughing go on forever and keep you awake at night. I've got all the herbal teas, the ginger ale, the crackers and chi ken soup and throat lozenges which provide only temporary relief. Right now I'm missing the spaghetti night at the First Christian Church, but I don't have much of an appetite anyway. My house is littered with snotty tissues and I want my mama.
I know it will end sometime in the near future, but that looks rather bleak after the rotten election results. Wothell is wrong with people? Has this country gone nuts? Even when the damn cold is gone, I'll still have to cope with living amongst people who think it's better to go back to the stone age of the Tea Partyites.
Well, I gotta go blow my dann nose.
Posted by Guenveur in Kent at 3:38 PM