Trapped by the Wrap 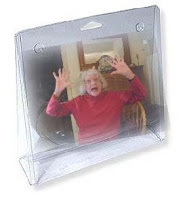 On Christmas, if you've been good, you get things, like this fine laptop. You also get useful gadgets of the the tech variety. What you also get with these gadgets, and food, and toiletries, and household products, is that which contains them, many times a rigid, transparent packaging which looks like glass but is apparently made of Kryptonite. These containers are dangerous, requiring the use of a box cutter, hatchet, screwdriver, pliers and a large box of Band-aids and maybe the occasional tourniquet. I think the purpose of this armor is to prevent thievery, since products are now available freely from the shelves of the modern store. I remember the bad old days when you had to ask the person behind the counter to fetch whatever you wanted to buy. Who wants to go back to that? Who even remembers that besides those of us of great age? There must be an easier way to make this packaging more accessible and still discourage the light fingered nerd who desires some futuristic device at the local Best Buy.

Because the modern toddler cannot resist drinking drain cleaner, we now have most household products almost impossible to open. I am at the age where I even have trouble opening a package of gum. Right now in my kitchen is a new bottle of dishwasher liquid, the top of which is the kind you have to press really hard to release the tabs that lock it, in order to screw it off. I cannot do this without a wide jawed wrench of some kind, which I am not in the habit of having at hand among my kitchen utensils. Fortunately, I have a son handy for such things, but what about geezers who live alone? Hey, new job op - opening things for geezers!
Ian Frazier has written some hilarious short pieces in the New Yorker featuring "The Cursing Mommy." It's as if he's living next door and has bugged my house, since that is how I cope with my frustration over trying to open things, even the goddam waxed paper inside the freaking cereal boxes. When I'm in that state I should not even be around sharp things, like knives and scissors which I need if I want my breakfast. I know I am not alone in this. In fact, I think I read somewhere that there have been some serious injuries from the damn clam shell packaging. I wonder if the insurance industry is behind this?
I don't have access to my scanner right now, so I had to do the illustration for this piece with Photo Shop, which I haven't done for a while and almost forgot how to. Got the plastic thing from Google and the photo from my camera. Such fun!
Posted by Guenveur in Kent at 3:37 PM

"Dishwashing Liquor"? Perhaps this is the reason you are having trouble opening things...?

I had liquid wrong and spell check replaced it with liquor. What would I do without my long distance critic?

I'm coming to your house for a shot of that! You know...it would make doing dishes more fun!