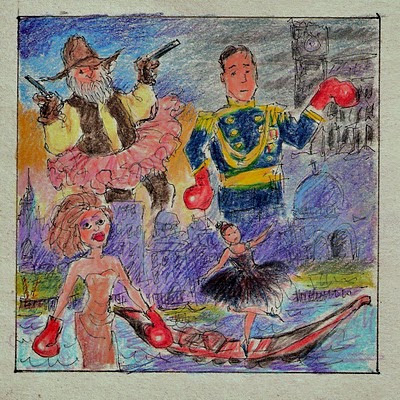 Oldest daughter Polly was here for three weeks and left last Sunday to return to Provincetown. leaving an empty spot in the old home place. While she was here we managed to catch a bunch of movies, trying to get in the Oscar contenders. Besides which I went on my own to see "The Tourist." which is at no risk to being a contender for anything, even though Johnny Depp was in it, a what-was-I-thinking role for my darling Johnny. Venice was gorgeous, Johnny looked like hell and Angelina was very scary looking. It was a Hitchcockian thing and not boring.
I saw so many films in such short order that I may have placed Jeff Bridges in a tutu curing the Duke of York's stammer, or the Duke duking it out with Angelina, and Natalie Portman doing tour jetes in a gondola.
Soring it all out, "Back Swan" was a third rate "Red Shoes," but very entertaining. Not nearly enough dancing, in spite of all the hoop-la about her practicing for months to recover her balletic skills. Never showed her feet, just the arms and hands, which I can't imagine required so many months to perfect.
"The King's Speech," starring everyone's favorite Mr. Darcy; he was splendid, as was Geoffrey Rush. It was painful to watch his struggle and equally painful to watch the kind of family he had barely survived: a brother, the ultimate Brit twit; a mother, the Ice Queen; a jolly clueless father. All of the performances were superb and made one glad not to be a royal.
"The Fighter" was about another dysfunctional family, but one with juice and heat and emotions all over the place. I'm not a fight movie fan, but this was about more than that, and again, the performances were just amazingly good. Christian Bale as a crack head and Mark Walberg as his younger brother were so, so good. Melissa Leo played this impossible mother, the opposite of the Ice Queen and much more loving - but impossible even so. Fine movie.
"True Grit," probably my favorite because Jeff Bridges is so very good as is everyone else in the movie. And the sound track, which is variations on "Leaning on the Everlasting Arms," a Burnell performance favorite, is just beautiful. Sally and I couldn't help but sing along, even though we were probably annoying the hell of the people in front of us. I haven't seen the John Wayne version for years; Polly's theory about that one is that they played it "cute," even though it's good, and that this one is more from the original book. The girl was terrific. There was an interview with the Coen brothers on Terry Gross the other day and she asked them where they found a girl with such a fine voice, since American teenagers seem to have that irritating nasal quality, a late version of the Valley Girl patois, They said the casting director interviews thousands before finding the act res they cast. It was such a satisfying flick. Last night there was an American Masters special on Jeff Bridges, from "The Last Picture Show" to "True Grit," including clips of The Dude from "The Big Lebowski," which I've probably spelled wrong.
R.I.P. A very fine singer died today: Margaret Whiting. Lovely voice, very big in the 40s and 50s. Worth hearing now.
Posted by Guenveur in Kent at 4:24 PM

Thanks for these reviews. We've seen two of 'em (Grit and Speech) and are prolly going to see Swan -- I don't care for thrillers but the idea of a thriller about ballet is such a contradiction in terms that I think we're going to cave.

WV -- press: huh? Isn't that what you do to a seam? Doesn't everyone know that?