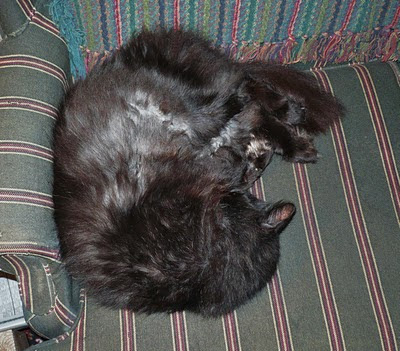 Last summer when Dupree was so ill we thought he was a goner, one of his problems was that his formerly soft belly fur was a mass of snarls and mats. He had been doing his summer shedding, but he had not been groomed often enough, with the result that the tangles were too thick to respond to the usual brush or nubby grooming glove. When John took him to the vet, one of the things she did was to shave his belly and get rid of the mess of mats. He didn't seem to mind having an almost bare belly.
When the fur started growing back lo! and behold! it was a lovely soft smoky blueish gray. And now, not just the belly fur is that color, but his whole undercoat is that lovely soft shade. It is most becoming, and gives him a very prince-like appearance, a bi-color coat, like one of those smoky black Persian cats you see on cat calendars. It is hard to resist in passing, when he is sleeping as in the picture above, when one must pause and give it a feel, which makes his toes curl. Not bad for a cat of advanced age. It's enough to make you want to shave all his fur off and see what hapens...a cat of another color.
Posted by Guenveur in Kent at 8:11 PM

Awwwwww, pray-shus! I love it when he is all curled up in his favorite chair like that looking so soft and fluffy. And you're right, it's so nice to walk by and pet his soft blue-grey underbelly and watch him curl his toes. Even though he's most anti-social and whiny a great deal of the time when he is awake, he is cutest when he's asleep!

Word verification: Hearedu, a web site for a university catering to..........WHA??? What did you say? Huh? I can't HEAR YOU!!!! Hey, get those earbuds out of your ears RIGHT NOW before I pull 'em out myself!