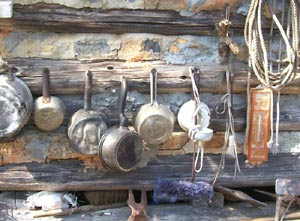 I heard such good story on the BBC this morning. There's a small village called Broughton (population around 2000+) in Northhanptonshire which has an annual celebration called the "Tin Pan Band." It's gone on for hundreds of years. Some say it was started to scare away the gypsies; some say it's to keep away evil spirits.
It happens in the middle of December; on a Sunday night. When the church bell starts to toll for midnight, the villagers gather together bearing trash can lids, tin cans, pots and pans, pieces of sheet metal, tin horns or flutes, or anything metal, and march through the village, tooting or banging away with all their might. The noisier, the better. One man said that one year "a young lad followed us along, hitting the metal light poles with a hammer." They try to keep some sort of rhythm, not just random noise.
Some years ago, in 1929 to be exact, a few people complained of the noise and the local authorities tried to stop it, but a there were violent protests, so it continues. Normally the village is very, very quiet, since there is no tourist trade or large institutions or businesses of any kind there. Thus it is quite something to have such a loud burst of sound, even once a year.
One of the men interviewed said that at 88 and a half, he thinks that this will be the last one for him. His wife still plays her bugle in the parade, but his marching days are over, he says. He made a comment about old age which I find quite apt. He said, "There.s no practice for old age. You can't have a go at it to see if you like it. You're just IN it."
I say, bring on the tin can bands.
(I can't find an audio of it, but if you go to BBC.co.uk/radio4 and type in Brought Tin Can Band, you might be able to summon it up.)
Posted by Guenveur in Kent at 4:34 PM

I think it's time to start one in Corning!!