Bad Onions and Other Non-News 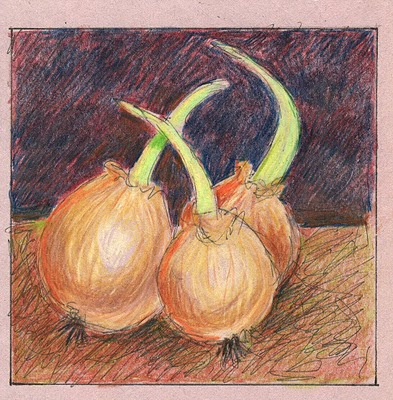 I have neglected this blog for a couple of weeks for no particular reason. I've been trying to get through a book that is driving me crazy. It's a really bad novel and I probably should just toss it, but there's a mystery involved and my OCD will not let me just skip to the end. The protagonist is a kid with Asberger's and the author must have caught it from him, because she just goes on and on and on and it's like being trapped by someone afflicted by the disorder. She digresses occasionally, but even her digressions are full of information you don't need. I feel like sticking sticky notes for future readers, like, "Didn't she just write the same thing back on page 135 and again on page 215?" "Don't you wish she'd just shut the hell up and get on with the story?" "Did anyone actually edit this goddam book?" So I decided to let it go and get back to my blog.
Onions. For some reason, I can't keep onions from going bad. I use a lot of onions when I cook.
Lately I find that they go soft and ugly - almost mushy and rank. I usually just get those net bags of yellow onions at the supermarket and they last forever - until recently. Is there some sort of onion blight happening? Is this an evil plot to get me to shop at Whole Foods? I try to be kind to onions. I store them in a cool, dry place. Since I use them pretty quickly, they shouldn't get all yucky on me. And now that Spring looms, they are sprouting - in the dark, like some science fiction life form ready to take over the kitchen, if not the world. I guess if I were starving I could use them in that condition, but being an American, I just throw them out. And I feel bad about that.
I'll be chopping onions, if I can find a few sound ones, as soon as I finish writing this post. I'm fixing an ethnically confused dinner tonight: Portuguese kale soup (only with spinach instead of kale because Ir's easier that way. You don't have to strip the spinach off the stems.) and Irish soda bread from a recipe in this morning's Beacon Journal Food page. The bread was easy to make and smells and looks delicious. According to the directions, you're supposed to let i sit, wrapped in a tea towel (a "tea" towel?) for five (5) hours after you take it out of the oven before you eat it. That would make us eating dinner around 9 o'clock and I can't wait that long. Besides, I'd miss "Modern Family." which isn't an option. So we'll eat it prematurely and hope for the best.
I realized too late that I should have drawn a picture of the soda bread, but when I did the onion drawing, I had not planned to make soda bread, So it will have to wait for its portrait for another time.
Posted by Guenveur in Kent at 4:51 PM