Go Away and Take Your Snow With You 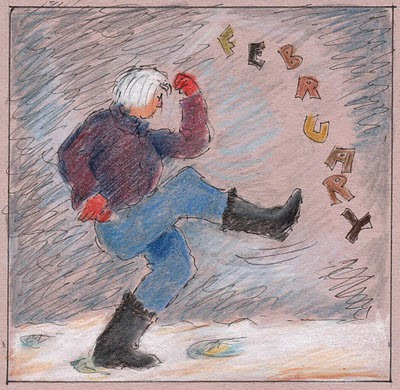 It's a cliche to complain about February, the longest month of the year, at least in Ohio. Even its name is mean. Is that f-e-b-r from the same root as febrile? I could look it up, but I have been turned snail-like and lethargic in my movements on account the pervading grayness. Life has become "who gives a flying fig?" in the daily lack of sun and warmth, to say nothing of the trash ad detritus reveled as rain falls and turns the snow into brownish, gray slop, in which is floating unidentifiable "things." Where did all that stuff come from? But then, who cares?

I was awakened in the middle of the night by thunder and flashes of lightning. Had I drifted off into a Rip Van Winkle stupor only to awaken in April? No. It was just February mooning us on its way out. March around here has had some fierce snow storms, so it's not over yet. But March does not beat us down like February. March goes out like a lamb and we can count on it to lighten our mood eventually.
So long, Feb. Try to coma back next year a kinder, gentler month.
Posted by Guenveur in Kent at 6:57 PM