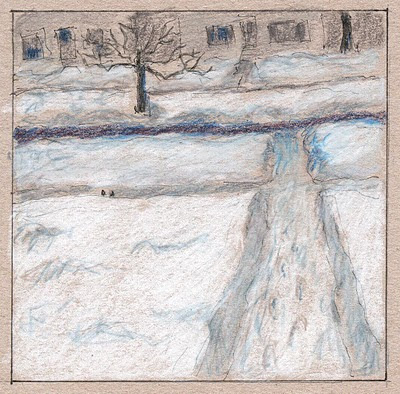 Once when my friend Susan and I were in London, we watched this really daffy morning TV show every day whilst breaking our fast. It was during the Christmas season and they were running a contest called "Spot the Pudding," Some poor sod was wandering around London dressed as a Christmas pudding, complete with a sprig of holly, and if you spotted it, you could win some sort of prize - a gift basket from Fortnum & Mason perhaps? Well, Susan and I spent a lot of time wandering about London ourselves and never spotted the puddling. We never happened to catch the program when someone HAD spotted the pudding, so we never found out what the prize was or where the pudding had been spotted. And some poor alum of the Royal Academy of Dramatic Arts was probably in that pudding costume, trying to break into the big time. Coulda been Colin Firth, even.

All this has nothing to do with my post today, except that in the above picture, you may want to try to spot Dupree. I love to watch him strolling down the sidewalk between the banks of snow. In his younger days, he would bound right through the snow, coming in with snowballs all over his belly. Now as a geezercat, he prefers the shoveled sidewalks and this is how he looks. Too cute, I think.
Posted by Guenveur in Kent at 6:47 PM