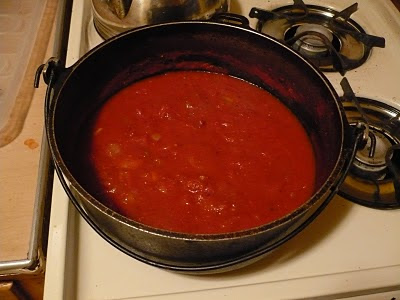 I am not a gourmet cook by any means. I cook in order to eat, not because I particularly want to emulate the great chefs of the world. I have a friend, for instance, who watches the food channels only. She knows the details of every famous dish creator. She doesn't cook much herself, but she knows how to make a lot of things and who invented each wannabe Escoffierian delight.

However, there are a few things I make that I think are quite tasty and which do not require hours over a hot stove. One of these things is my spaghetti sauce. It is my own invention, evolved over years of discoveries of what mixes well with what. I have a neighbor, whom I do not know well, who is from Italy. When I told her of my ingredients, she literally threw up her hands and said, vehemently, "No! No! You do not make it that way. Just tomatoes, garlic, salt and pepper!" Another neighbor who was in on this conversation, whose husband's grandmother is Italian agreed with the protester. She makes this grandmother-in-laws spaghetti and doesn't use any of the ingredients I use. "No!"

I was shocked a few years ago to discover that a very dear in-law of Italian descent, whose aunt's spaghetti sauce is legend, that said aunt actually uses Ragu in her lasagna. Ragu! From an Italian! This in-law, whom I love dearly, has claimed that only Italians can make Italian food, and that those of us not of the blood are just being presumptuous to even try. And her aunt uses Ragu! Shocking!

So I make my sauce with tomatoes (canned in the winter, fresh when my tomatoes come in), tomato paste, onions, green peppers, garlic, oregano, rosemary, basil, Worcester sauce, a bay leaf, salt and pepper and chicken stock if you have any handy, or even left over gravy. All this is apparently a crime, but everyone who's tasted it has loved it, including a few Italians, whom I don't tell about the ingredients. In the summer I have all fresh herbs, but dried ones work fine in the winter.
Speakimg of gravy, I had some left over from a roast beast the other day. I used it to make mushroom barley soup. I happened to be out of Worcestershire sauce, which I like to use to de-glaze the pan. I have to say that I cannot cook without Worcestershire sauce. I don't use it on oatmeal or dessert, but I love it with just about everything. My father taught me to use it in scrambled eggs, just a soupcon, to add flavor. That started me using it in lots of other stuff. Anyway here I was with sauteing onions and mushrooms and no Lea and Perrins. I decided to try a bit of balsamic vinegar and a bit of sherry and I must say it was just a very fine mushroom barley soup. Since I don't have any French friends or neighbors to tell me "No! No!" I guess I'll try it again. Soup is very forgiving, I have found, and this winter it's been a godsend.
Tonight it's beef stew in the slow cooker and I can spend the afternoon reading, or trying to catch up with all the Oscar winning movies I've been DVR-ing on TCM. Yesterday I watched "Chariots of Fire." So good.

And we have continued your tradition by making the same spaghetti sauce (remember sometimes you also blend fennel seeds in there). The Sicilian owner of our fave Italian restaurant here in town recommends also putting a peeled potato in there while it's cooking to absorb acids or some such thing.