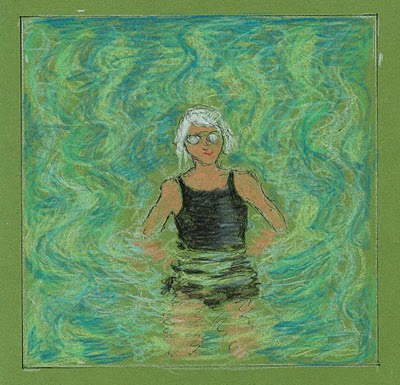 Right now I am missing my water aerobics class. I slipped on ice a couple of weeks ago and skinned my shin. I got an infected spot which is healing but I'm not allowed to go into the pool until all is clear, which should be next week. I really miss it, because if I'm not doing that, I am a slug. I do not like exercise much, but it's something that a person must do; otherwise stagnation sets in.
The water feels so good - it's warm - and I do enjoy the companionship of the women in the class. Some of them have decamped to Florida for a couple of months, which was a wise thing to do this particular winter. We laugh a lot, which is also a healthy thing to do. When I broke my hip last March they brought cards, candy and lots of good smelling lotions and plants. We do that when someone is out for a while with an illness or surgery.
Most of us wear unflattering, expensive bathing suits which don't fade in chlorinated water. We look like a bunch of nuns. Most of the women are 50-60ish. I think there are a couple in their 70s, but I am the only real geezer in the group, so they think it is remarkable that I can stand upright most of the time (except when I slip in the snow.)
One dear, kind women, who is also from Kent, picks me up so I don't have to drive in the dark- the class is at 7 am. My favorite time is the make up class on Fridays at 4:30 in the afternoon when there is sun shining on the pool and you can forget all about the snow and ice out there. We never have sun on the pool in the mornings, even in summer, because we are on the wrong side of the building. I look forward to going back very soon.
Addendum: Saw "Nixon in China" from the Met on Saturday. It was fascinating. The same singer has played Nixon since 1987 and I think he has morphed into him. It was terrific. The libretto was based on actual documents from the 1972 meetings and the dinner. In the scene with the famous overstuffed armchairs, Mao is waxing philosophical, Nixon is trying to talk business and Henry Kissinger has no idea of what's going on. Madame Mao is strident and shows off her ballet of the Red Detachment of Women. Pat Nixon wants to go back to the past. It's not something I want to see again, however. The music is very repetitive and things move very slowly. But I'm glad I went to see it.
Posted by Guenveur in Kent at 6:39 PM

I do 20 laps now every day after my workout at the gym. It is absolutely addictive. Every Wednesday I do a water aerobic class for an hour which is grueling! I wish you could visit so you could see the Therme Erding down the road from us. Just went there last week: