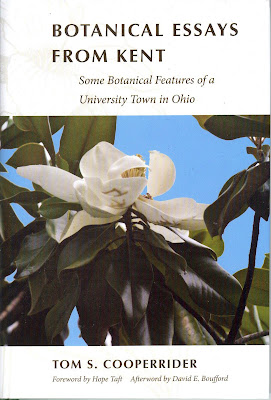 My friend Tom is a really old friend in every sense of the word. We've known each other for over 50 years and we are the same age. Tom is married to Mixie, and she is a tad younger than we are, but not by too much. They are both botanists. Tom taught in the biology department for many years, and Mix managed the Herbarium at the university.

Recently Tom's book of essays was published by the university press, and he gave me an inscribed copy. Now his magnum opus was a huge tome, a comprehensive study of Ohio plants. He worked on that one for years and it was the culminating work of his academic career, a scholarly volume for botanists to study and use as a reference.
This new book is a collection of essays, suitable for the layperson, focusing on the flowering plants and trees just around the Kent community. It relates how certain plants came to this area via the glaciers thousands of years ago, historical vignettes of early cultivation and the appearance and disappearance of certain native and non-native species.
One of the highlights of Tom's research around Kent, was his discovery of a bog full of tamarack trees, the largest stand of those trees in Ohio. They are deciduous fir trees, which shed their needles every fall. They don't really belong here but were brought down from the far north by the last glacier to crawl over Ohio - before it was Ohio. The bog is named for Tom and is a delightful place now, with a fine boardwalk and all kinds of interesting plant life, fortunately labeled for those of us who are botanically challenged. It is is also a great obscure connection to fame for whose of us who know him. I mean, how many people can say that they know the namesake of an eponymous bog?
When I went to pick up the book at their home, we had a great conversation about our younger days, when we were part of a lively group of social animals. Tom said that we were the Bright Young Things of the university community. I don't know about that, but I do know that we had such a good time with a group of such good people. Unfortunately, Tom and Mixie and I are pretty much the only ones left, and we are hardly the social butterflies of yesteryear. We miss our old friends a lot, but we revived some fine memories the other day. One of the disadvantages of getting old is losing people, so that you know more dead people than live people, and you don't get to spend so much time with the live ones still around.
And on that cheerful note, I close this post.
Posted by Guenveur in Kent at 4:25 PM

I want a copy of this book! I'll get one on my next trip home. You and the Cooperriders and that crowd were truly the glamourous folks of Kent in your heyday. It made becoming an adult look like a very alluring prospect indeed. I wish you could lure Lee Clark back for a reunion.