The Roundabout Chickens of Suffolk 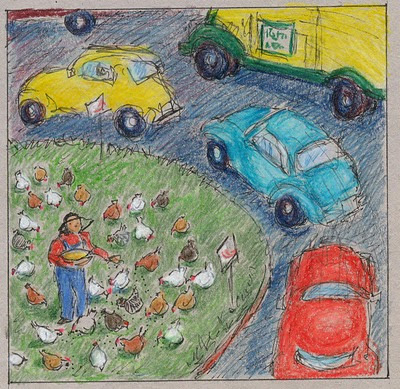 In our town there is a move for folks to raise chickens, right here in the city. I wrote several months ago about one stray chicken who wandered away from her urban chicken yard and ended up in ours. John found her owner and received a reward of some half dozen delicious free range eggs. She has not returned, unfortunately; no more free eggs for us.

Apparently the notion of urban chicken farming has hit the United Kingdom. This morning on BBC4 radio, there was a whole program devoted to chickens and the Brits who love them. One woman takes her chickens (she only has two) on holiday with her, toting them in a cat carrier. She asked the interviewer if she would like to have a "chicken cuddle," which offer was accepted rather gingerly. The chicken jumped out of her arms, maybe realizing that the person wasn't really into it. No one was offended. There was a serious discussion of the chicken in history, mythology and religion, e.g. the cock that crowed three times while Peter denied Christ as predicted, the use of chickens in voodoo ceremonies, etc. I guess there's even some magical rooster involved in a Harry Potter spell of some sort. One person called chickens Velociraptors with fluffy knickers.

My favorite story, though, was about the feral chickens of the roundabout in Suffolk. No one knows how they ended up there; perhaps they were abandoned at some point by a failed urban chicken farmer. An older man noticed them and would feed them occasionally. One day, while he was there, a lorry accidentally dropped a sack of feed. The old man then got serious feeding them and they began to multiply. Merchants would give him feed for them, and he would walk from his home every morning, five miles each way, and feed what soon became a flock of three to four hundred chickens. He said he fed them to keep them out of the busy road. His legs finally gave out and he couldn't manage the trip any longer. Later he was shocked to discover that the flock had dwindled down to just a few chickens. They are still there, only about 20 now. He assumed some sort of predator got them. It seems that they are still getting fed by passing strangers, but they;ll never again have the services of their benefactor know as The Chicken Man of Bungay.
Posted by Guenveur in Kent at 4:58 PM

We have some chickens like this near Chris' workplace in a grassy area; I assume they are not feral and that someone tends to them. Remember how much I wanted a pet chicken as a child? Polly got a GOAT but I never got my CHICKEN! Your granddaughters have considered stealing one of these chickens to bring home for me but of course, that would unfair to the poor critter. Even if I would like a "chicken cuddle"...

Ahhh, I remember that goat! He/she got out and about the neighborhood upon occasion!!