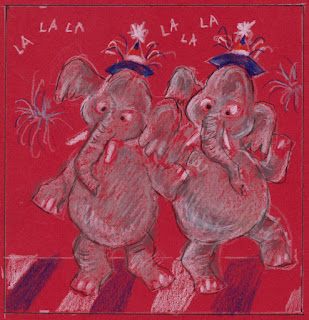 They can’t be serious, can they? I mean, look at the line-up, what’s left of it. I think Newt’s still in, assuring everyone of his brilliance. (Oh, does that make him one of the dreaded “elites” which used to mean upper class, but now seems to mean people who can construct a sentence or read French.) Romney’s still in, but they are so afraid of his religion and his money (Republicans afraid of money??) that I think they’ve pretty much written him off. Ron Paul is hanging in by a thread. Donald Trump, whom they seem to fancy as some kind of king, maker, has deserted Newt and thrown his ego-inflated support to the complete nadir of  presidential campaign history: Rick Santorum. (This after he had said that he, Donald Trump, would run if Newt didn’t become the front runner.)


Are they all nuts? My God, they gave us eight years of dumb already and are aiming to do it again. Have they listened to Santorum fumbling through his twisted pseudo-theological rambles? He’s not happy about birth control or pre-natal testing. I love it that every four years, the Republicans rant about this sort of thing while the country is grappling with economic, energy and serious world issues. The Republicans also put great emphasis on the state of candidates’ religion so long as it’s Christian regardless of their personal ethics. Interestingly, Catholicism is now a good thing to be part of. Newt’s a convert and I think Santorum was born into it. I must say, Newt picked a helluva time to become one, considering the disarray the church is in over the preponderance of child abuse by the clergy. (I am a recovering Catholic myself and have a hard time wondering why anyone would choose it over, say agnosticism or paganism.)

The GOP candidates have had a gazillion “debates” which have no resemblance to the form, and spent gazillions of dollars on ads blasting each other on TV ads, which, fortunately have not played yet in Ohio. I can just imagine, now that they have trashed each other, the kinds of vitriol they will pour onto President Obama during the campaign. With the Super Pacs wallowing in so much money, thanks to the “non-political” Supreme Court, I think it would be a good idea to cancel newspapers, turn off the radio and TV next fall and find a comfortable cave to hide in until after the election.
Posted by Guenveur in Kent at 4:57 PM

Come to Germany and have some Kaffee und Kuchen! (If only.) I'm not even following this election...

Actually, The Donald has endorsed Romney, not Santorum. If anything, The Donald has heaped a whole lotta criticism on Santorum, as if it really mattered anyway. What scares me about Santorum is that he wants to move this country Forward, Into the Past, as if he can take us back to those halcyon days of Ozzie and Harriet when women wore dresses and stayed home and doted on the kids and husband and didn't DARE work outside the home, and happily produced 15 kids because birth control didn't really matter that much anyway.

Boggles the mind, it does.