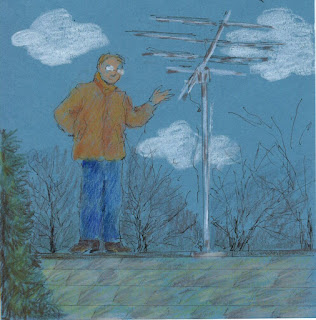 After much thought, triggered by overpriced cable costs, we have returned to the days of non-cable TV. We are in a good location to receive signals from a variety of channels. We had been using UVerse, which provided us with over 200 channels, only 5 or 6 of which we actually watched. Golf channels? Cooking channels? Who watches that kind of thing? We were spending around 80 bucks a month more than we needed to for TV alone.


The in-house handy man bought and installed an old fashioned antenna. We cancelled the UVerse account and went with another provider for the phone and online service and are saving those 80 bucks a month for other things.

The main reason I wanted the expanded channels was for TCM, Turner Classic Movies. However, now one can watch old movies on Hulu or YouTube. While it was nice having DVR to record multiple shows, one can catch almost everything online the next day. We cab connect the laptops to the big TV if we want to.

Fortunately, we now have multiple PBS channels, since each of our two stations have 4 or 5 sub-channels, which we couldn’t get with UVerse. As long as I don’t have to miss “Downton Abbey” I’ll be all right. (Oh, it ends this coming Sunday! What shall we do?)

I still have my Internet radio, which I use more than TV. The Beeb is celebrating Dickens’ bicentennial with wonderful dramatizations of his hovels. They’re doing “Our Mutual Friend” and “Nicholas Nickleby” right now. Actors like Ian McKellan and Michael Kitchen (“Foyle’s War”) are in the casts of these programs, as the BBC does not stint when it comes to quality.

There was an article in the Akron newspaper right about the time that we decided to make these changes, written by their business editor. She and her family had decided to do the same thing last year, for much the same reason. She claims that this is the coming thing, that many people are watching TV quite differently, using their computers more and watching their own selections, rather than being stuck with multiple unwatched channels. I think the only thing that would make me want to sign up for cable service again would be if I could choose only those channels I want to watch and pay accordingly. Maybe some day they’ll wise up and offer such a deal.
Posted by Guenveur in Kent at 4:33 PM