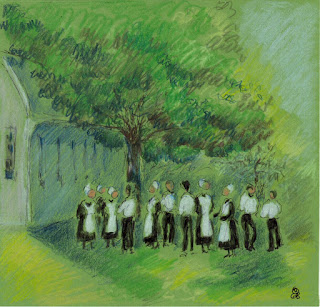 Last night on PBS, I watched a documentary on the Amish. It was filmed in both Pennsylvania and Ohio and was very well done and very respectful of the Amish desire for privacy, in that close up photography was not used.

Ohio has the largest Amish population in the U.S. of A. I live between two large communities; one is north of here in Geauga County and the other is south of here in Holmes County. The northern one is supposed to be the stricter, and they do not cater to tourists. The one in Holmes County is full of tourist attractions: shops, restaurants, farms and homes to tour, B.amd B.s and a few large hotels. Both areas are quite beautiful, with little back roads to explore and great scenery and green hills

In some of the shops run by the Amish, you can hear Swiss German sprinkled with English words. Some of the farm wives run little shops next to their houses, full of notions, toys and interesting coloring books, published locally, containing wonderfully strange drawings done by area folks. One of the shopkeepers told me that she could spend all day coloring if she had the time. There are a variety of small school houses, differing by sect. The children play baseball, jump rope and tag, and it seems very old fashioned and fun. Schooling ends after the eighth grade. It is a hard life, though, especially for women, since there is no electricity and such niceties as vacuum cleaners and washing machines and families are quite large.

The above scene is one I saw a few years ago on one of those lovely June days we have here in Ohio. Everything is brilliantly green. This was at a crossroads in Holmes County on a Sunday afternoon. I don’t know what the occasion was, but in the midst of all the green was this group of men and women all dressed in black,, with the white aprons and white shirts. I wanted so much to take a picture of it, and I probably could have with my tele-photo lens, but I just didn’t think it would be right. I’ve kept it in my memory. It’s the sort of thing you’ll never see again and it was so striking that I’ve never forgotten it.

NOTE: Someone has put some fake links in this blog. Do not click on the highlighted words. I don't know how it's been done and I can't seem to undoi it in the edit mode. Blogger Help is no help.
Posted by Guenveur in Kent at 3:58 PM

It's a lovely picture and I believe you were right not to take a photograph. I've seen similar charming Amish scenes on my various treks out to Lancaster and never taken a picture of the people. I have, however, take pictures of Amish laundry hanging on the clothesline.

Remember that time when we were visiting that one summer and we went and talked to that Amish family - I tried to speak German with the father but his dialect was quite different - and Katina ended up snapping photos in the car while we weren't watching? They were mainly blurred self portraits, but she came close to violating that tradition. Oh well, she was only 2 at the time, but it showed a rebellious streak from an early age!