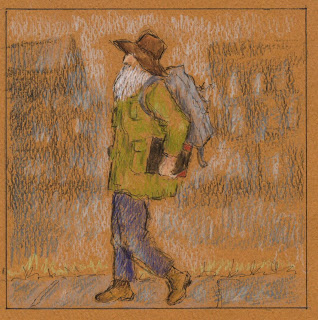 It's been a sad week in our town. Last week Gordon Vars was struck and killed by a car. Gordon was a retired professor of education at the university, a gentle, scholarly man who loved to sing in the church choir and the Kent chorus. He founded the Friends of the Bog, and stove mightily  to protect the Thomas Cooperrider tamarack bog, which had been threatened by developers. He was much admired and will be missed by many in the community. I will miss seeing him at concerts and plays, which he and his wife attended at the university. A lovely man, he was.
This past week-end, F.U. Bob died suddenly of a heart attack. Bob got his nickname as a result of what was probably Tourette's syndrome. If you passed him on the street, he would automatically greet you  with a certain comment or flip you the bird. He meant no malice by this but the nickname was how everyone knew him. My friend and former art professor Bob Morrow told me that Bob had been one of the most talented art students he had ever had. Morrow assumed that F.U. had damaged his brain with drugs during the high old times here in the 60s.  That may have triggered the Tourette's, if that's possible. At any  rate, in the last 15 or so years, F.U. quit greeting people in the old way and began to socialize and become part of the community. I assume that he was able to get some medical help.
He started painting and drawing and made color copies of his drawings and sold then at the farmer's market and art fairs. My friend Bob Morrow claimed that Bob had lost his magic touch. I had a nodding acquaintance with F.U. He was always at the summer chamber music concerts and any other art events around town. In fact, it was F.U. who inspired me to start taking my sketch book to those chamber concerts, since I had noticed that he always broght his books and markers with him. It's an ideal place to do this sort of thing, since it's dark and no one can see what you're doing and ask to see your work, which is fine with me. We never sat in the same place, and we never shared our work, but we were always drawing away to the music. He preferred the contemporary composers and knew a whole lot about their music and would tell you in great detail. I learned not to ask questions of him.  He would offer informed critiques, if one had the time to listen.
Actually he had a lot of friends. He didn't have a car, but people would offer him rides. I  didn't know what he lived on, but Sally said that he had a small inheritance  or maybe his family gave him money to stay away. I had thought he lived on disability, but I heard that he had refused any government help.  He was such a part of this town, that it's hard to imagine that he won't be shuffling along on his way to a concert, a play or conversation with friends.
Two men, quite different, but such a part of our town that to lose them creates a hole in the fabric of the community.
Posted by Guenveur in Kent at 6:57 PM

Somewhere at your house I have a print of the Crain Ave. bridge that I bought from him at the Farmer's Market years ago. It will be very strange to come back to Kent and not see him. He, along with "wheelchair George", are often the first people I see on the streets whenever I am coming back from the airport and entering the town limits. I'll light a candle for him at one of our beautiful churches over here...

F U Bob preferred Robert, and he was exceptionally easy to talk to (and ask questions of) when treated as any other human being.

On occasion, I had to remind him to be polite to the people around him.

He will be missed by many.