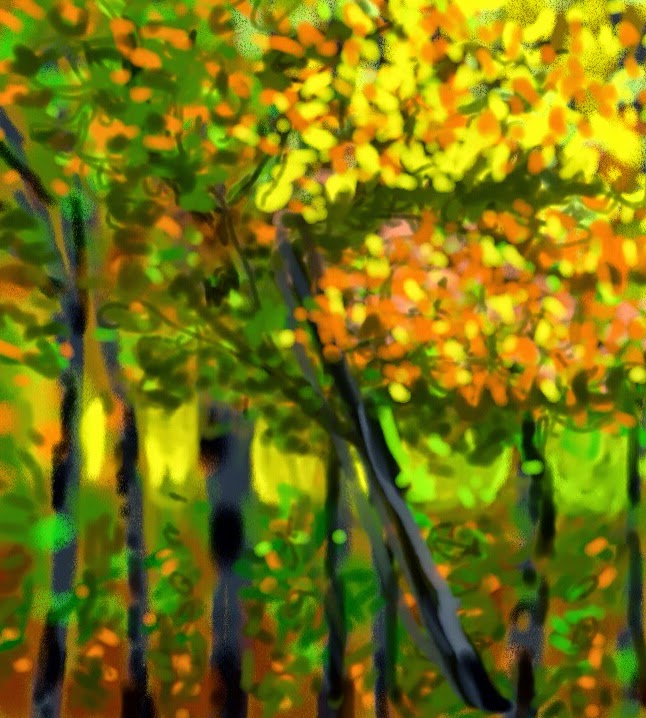 The fall colors arrived with visitors from Germany, which was one of the reasons they ( the visitors) chose this time of year to come to Northeastern Ohio. While there is beautiful scenery in Germany - the Alps, castles, lakes and rivers -  there are no bright leaves to gawk at in the fall. Last year Emily came in mid-October, the usual time for the color, but nothing happened until she left, when everything burst into color the first week of November. This time the weather and the leaves have been perfect.

This time, too, Chris is here, my darling Australian son- in- law. It's been a long time since he's been here. To add to his pleasure, the World  Series is on. When they lived in San Francisco, Chris became an ardent Giants fan. Since I am not watching the games, I don't know how they are faring so far.

We have taken some rides up to Geauga County, and shown off the "new" Kent. It's a happenin' town these days. People from other places come to gawk, eat and shop. The restaurants seem to be doing well, but  the retail shops keep changing. Most of them are aimed at students and people  with disposable income. A couple remind me of the ill-fated mall Scotch-tape shop from an early SNL skit. One just sells those cloth hand bags made by some woman whose name escapes me. It may have gone by now, as people rush after the NEXT BIG THING. The pop- corn shop thrives, of course, adding salt and sugar to the diets of its devotees, who are encouraged to walk it off on the Esplanade, an expensive walkway connecting town and gown. The little bake/shop restaurant where I meet the ladies who lunch seems to be suffering these days, with fewer people coming in for take-out. There is a lot of competition for those who have been around and survived the tatoo par lord and bars thatproliferated in Kent for many years. Many of the new businesses have benefitted from tax breaks not available to the old timers.  This seems to be the norm for cities looking for development. Money rules.

But I digress. The picture is today's view from my window, enhanced by having been thoroughly cleaned inside and out by the man from Oz.

Posted by Guenveur in Kent at 7:11 PM