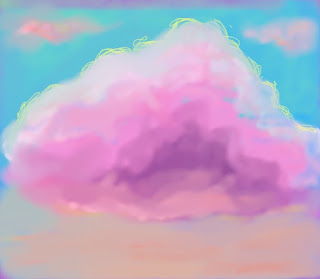 I have written before about how much I love August. This summer has gone so fast that it sneaked up on me. We've had such variable weather, mostly cool, and in the first two months, enough rain to make you think of building an ark. The garden has delivered about three anorexic tomatoes and no green peppers. The herbs are looking puny, and the only things bursting with blooms are the marigolds, which have never looked so good.
Attendance at the county fair was down, as was the number of exhibitors. One of our aerobics ladies, a wizaed of the baked goods competition, said that even the number of entries was way down in both that category and the vegetable display. One reason for the low attendance may have been that the schools started a week before the fair. I didn't go this year or last, for that matter. There was a time when Polly had goats, that we all entered something and felt like genuine country folk. Polly won a blue ribbon for her Apple  (I have typed the a word four times and Spellcheck insists on capitalizing it, no doubt under orders from the ghost of Steve Jobs; I thought of changing it to pecan, but that would be wrong.)  pie, and her goat Finney always won at least one hideous trophy. I entered a macrame piece ( macrame was big then) but I don't remember if I got a ribbon for it.
Before this month ends,  I have to mention and illustrate the incredible sunsets. Surrounded by trees, we don't get the full effect, but people have been posting  some pretty spectacular photos. We've had the gorgeous blue with puffy white clouds skies,  and until recently lots of greenery. Right now it's dry and the lawns are tan and a bit crunchy underfoot. not unusual for the end of summer and early September. Well, that's the weather report for today.
And how's the weather in your neck of the woods? (Shades of my father!)
Posted by Guenveur in Kent at 8:56 PM