Sixto Loves Me, I Think 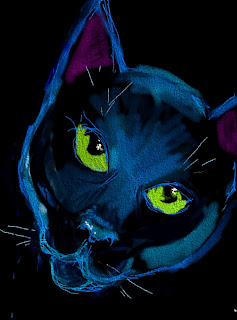 I've mentioned before that Sixto the cat is a lap cat, a situation I've used to avoid things like making tea or starting dinner when he is in place. John is still his main person. However, last weekend, John took off for a folk festival in Canada. For almost four days, I could hardly get Sixto off my lap.
In the morning, I'd be reading the paper, and he'd crash through it to curl up on my lap. He'd occasionally  start by making a few head bumps, gazing soulfully into my eyes.
When I'd get up, dumping him off, he'd start grooming himself nonchalantly. As soon as I sat down, the process started over. He doesn't just curl up and snooze. He likes the flop down, roll onto his back, curl his front paws over his nose and peer up at me for a while before he drops off to sleep. He's not a large cat, but he requires a lot of space because of  having to arrange the proper draping of his very long tail. In hot weather, having even a small furry cat on one's lap can be an uncomfortable addition to one's person.
He knew John was back before I did. From a sound sleep, on Monday evening, he suddenly woke up, jumped off my lap and got to the front door just as John opened it to come in. It was a bit uncanny. I guess I'm an adequate substitute when his main person is gone. Even now, though, he is favoring me with his presence, perhaps thinking John may abandon him again. So I think I have risen to a substitute main person.
Posted by Guenveur in Kent at 9:14 PM