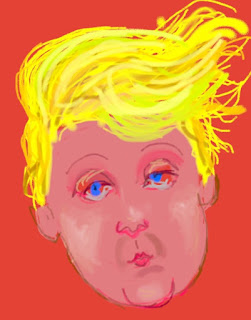 There is now proof positive that Fox News is all about entertainment, not honest information. I did not watch the "debate," since I do not have cable. ( Who needs 250 channels when you only watch 6 or 8 at the most?) However, I have watched replays of what was apparently the crucial content: the constant focus on  the least likely and least likeable contender, whose name I shall not use, since he or his minions probably Google it every ten minutes.
First of all, he was,by some happenstance - hah! - placed front and center on the stage. Couldn't miss him if you tried which nobody  tried to do. If the strategy was to amuse, or irritate, they sucmnceeded. If they were going for their usual yahoo audience, they succeeded. Qualifying his crude, rude comments about women and immigrants from Mexico ( Aren't all Spanish speaking immigrants Mexicans?)' as a protest against "political correctness" he then felt free use the language of the terminally ignorant.
Of course,the result of his being encouraged by the moderators to spew his venom is that he's been constantly in the news ever since. His bloated face looms out from print, the Internet and TV like  a wayward comet. (I couldn't resist doing a caricature myself. It's just too easy.)
If I were one of those other candidates, I'd sue Fox News for malfeasance, or something. It was disgraceful.
I am not a Republican, and far from conservative, but I wonder how the GOP is going to overcome the damage he is doing to their cause. Perhaps if the media could restrain themselves from ratings or selling papers, and focus on some sane presentation of serious presidential possibilities, say,  people who don't  believe the earths is 5000 years old, and that  the hand  of  man may have something to  do with climate change, and that just because she's a female a woman like  Sarah Palin is not presidential timber, then perhaps they might put up someone fairly decent for me to vote against next year.
Posted by Guenveur in Kent at 9:57 PM

I love that you have a blog. I look forward to more. I think Trump is doing a great job of showing us exactly who the Republicans are.