Out of the Loop 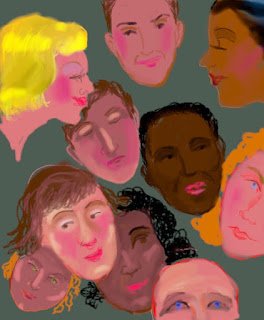 I think it started somewhere around the fourth or fifth season of "Dancing With the Stars," maybe a little later. Or maybe the last five or six years of SNL. With  "Saturday Night Live" it was with the guest musicians.  There is always the excited preface, hyping what is to come. For DWTS,  in the weeks preceding the first show, there is the sense of suspense over which stars we shall see. Who are the famous stars we will watch sweating and straining for the next few weeks, wearing sequins and tulle and diaphanous bits of colored cloth as they twirl about? Actually I haven't watched it for a long time, for reasons to follow' but I still remember this giddy hype.
In the first years, it was a guilty pleasure, fun to watch, and impressive to see non-dancers achieve what my friend  Tom called fancy maneuvers, and wondrous feats with their feet. The judges were experts, actually judging and seemed to know and explain the art of ballroom dancing. I have never been a good dancer, even in doing the simple box step, so I am in awe of anyone who can manage this skill at all, to say nothing of the intricate routines these people were able to develop over a few months, people like actors, singers  and athletes, people whose names and occupations you knew. Even then the term "star" was a bit of a stretch, but they were famous enough that I didn't have to Google them, if Google was around then.
It started happening little by little. When the announcement of a certain season was made, I had no idea who half the people were. If they were stars it was on some planet out of my my own universe. Apparently those people who open their lives to  "reality" TV are now stars, and everyone knows them except for me. I am completely out of the loop. I quit watching DWTS, which is probably all right with them.
About SNL. That started, as I wrote about above, with the musical guests. In the good old days they had Paul Simon, James Taylor, Mick Jagger, sting and all those great singer-songwriters  who sang music with tunes and words. Then they started with the grunge groups, the boy groups, the rap
groups, and the music is back to three chords and repepetative words. I do not know who these people are.
The only contemporary pop stars whose names I know are Miley Cyrus and Lady Gaga, and that's only because you can't get away from them, rather like Madonna thirty some years ago. They're rather like the Donald Trumps of pop music. Half the time I don't know who the guest hosts of SNL are either. They may be from some cable TV show I don't watch. They still bring in recognizable people, though and the new cast is pretty good. I don't know their names, though. By the time I learn their names, they'll be off to Hollywood like the rest of the old crowd.
I don't mind being out of the loop. I have  one of my own.

Posted by Guenveur in Kent at 1:22 PM