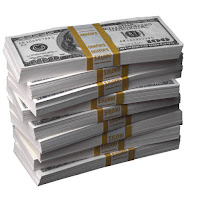 Well, the angry folks are at it again. Today I received another email in very black, bold fonts about how much Bill and Hillary will get when they retire, if she becomes president. When she retires she will get all this money for having been president, PLUS her senate retirement pension. And Bill will get his governor AND president pension,too. AND they'll just have ALL this MONEY from us tax payers. It goes on and on speculating just how awful it will be if we let this happen by electing Hillary.
I am asked to pass this on to warn people about how these unworthy folks will be RICH when they retire. I have no idea how much of this nonsense is based on facts, but it really seems to be a very hot issue for whoever got it started on the internet.
Now the person who sent me this has more money than God, even though she's never been a senator or a president of anything. She's extremely conservative and I was confused by her sending me this message, as if the Clintons' making money is a bad thing. I have always thought that being rich is a good thing for conservatives.
Posted by Guenveur in Kent at 6:18 PM