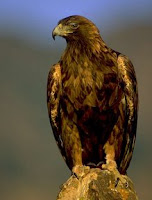 This is about a phenomenon which I am certain is not experienced by only me. It involves bird sightings and the results of same. The birds involved are rare for these parts.
Many years ago,I was driving aimlessly on a nearby country road, which at the time only had a few houses on it and those were farm houses. Suddenly above a cornfield on a hill appeared a golden eagle. He was magnificent and I slowed down to get a better look, since he was about to land in the field. Unfortunately another car stopped and a young man jumped out and started chasing the great bird, which promptly soared off. I was ready to smack that idiot guy for scaring it off. At any rate I did get to see that beautiful misplaced bird which was probably blown off course over Lake Erie thirty miles to the north. Now every time I drive on that road, which is frequently, I hope the eagle, or his grandbird, will show up. The area is now replete with McMansions, so any self respecting bird would never find another corn field there. But I always look.
The same kind of thing thing happened not too far from there a few years later, pre-suburban sprawl. This time it was a huge pileated wood pecker which landed on the branch of a tree just as I drove by. It was much bigger than the average red-headed woodpecker but by the time I stopped to get a better look it had flown away. So even though that was at least 15 years or so ago. I always look for that bird when I drive by that spot. It, too, has become over developed with the same enormous houses replacing what had been a tree lined road.
The third rare bird sighted was a snowy egret standing in a pond on Rte. 62, on the way to Wilmot where I go once a month to the Wilderness Center to the storytellers' meeting. I checked with the naturalist at the center and he said that it was a white heron, which is not that rare in Ohio. However, I always look for that white heron every time I drive by that pond and I have never seen it again. But as with the others, I always look.
Another time, on the same road to the Wilderness Center, just southeast of Canton, I saw a white peacock perched on a fence in the middle of nowhere. I have never seen him again, but I always look for him, which is the point of this rambling piece.
These sightings have become a sort of touchstone when I am on the road. I cannot not look for those long ago seen creatures. Am I nuts, or what? Is this something that other people do? Doesn't have to be birds, just something out of the ordinary which you hope you will see again. But nothing awful.
By the way, the land of the golden eagle is now an alpaca farm. They belong to a McMansion and roam about the former cornfield.
Posted by Guenveur in Kent at 6:15 PM

I have some "bird landmarks" of my own:

There used to be a either a white egret or a white heron that was in the occasional wetland that springs up behind Daily Monument between Mogadore Road and I-76 that I don't see anymore.

There is also a great blue heron that fishes in the spring, summer and fall months in Plum Creek next to the former Pottery on Mogadore Road.

I see a red tailed hawk a lot of times sitting on the wires near the traffic light at Mogadore Road, I-76 and County Hwy. 18. Today it was actually out on a tree on I-76, but it usually frequents that intersection near the 76 entrance ramp at Mogadore Road.