How to Read With Feeling 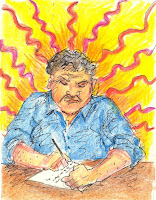 One of my favorite bits that Steve Allen used to do on his TV program was to read letters to the editor using the underlying feelings the writer expressed. He said that people went to the trouble of writing these letters because they felt very strongly about the issue and wanted the public to become aware of it.
We have a weekend feature in our local paper titled "Sound Off". Unlike regular letters to the editor, these are very short, only a sentence or two, and unsigned. I always read them - not aloud, but in my head - in the proper manner. The issues mostly have to do with the lazy local law enforcement personnel, slovenly neighbors, people on welfare buying Ben and Jerry ice cream (paid for with YOUR taxes!), unfair high school coaches, and the occasional praise for some organization or individual signed off with "Keep up the good work!"
There are many exclamation points and all capital letter words. No specific person or institution is ever named;viz., "A certain supermarket had better teach their (sic) employees some manners." "Why is that police car in one of our towns always in front of the donut shop?" "I am sick and TIRED of reading about a certain high school on the sports pages of your paper, there are others which also have good teams." These sorts of entries lead to a lot of guessing games, since we are a small county. I mean, you know which town has the donut shop after all.
And now we also have the cyberspace writers who have the advantage of being able to use 78pt., colored, boldface fonts in those emails that get passed along. These days they are about 1.)Barack Obama having an AFRICAN MUSLIM father and a WHITE ATHEIST mother and how he went to one of those MUSLIM SCHOOLS, or 2.) The ILLEGAL IMMIGRANTS are going to take all our TAX MONEY and get FREE MEDICAL care, or 3.)We are losing our CHRISTIAN values and we need to get PRAYER back in the SCHOOLS. A few people who are friends (with whom I never talk politics or religion) actually forward this stuff to me. I read it with all the emotion it deserves and delete it forthwith.
I know if Steverino were stil with us, he would do the same.
Posted by Guenveur in Kent at 4:57 PM

Gawd, I REMEMBER Steve's doing that! Thanks for reminding me.