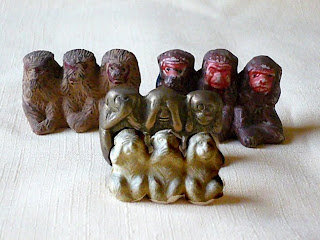 It has become obvious, in this
endless presidential campaigning, that it is dangerous to open one's mouth. Hillary "misspeaks" and Barack "misspeaks" and those brilliant, all-knowing debate monitors, or whatever George and Charlie call themselves, spend most of the debate posing "gotcha" questions which are not really questions, but unsubtle commentary. Having been accused of lobbing soft balls to Obama, they have now decided to make a reach for obscure and unimportant factoids, hoping to get the American voter stirred up. No flag in his lapel? WTF is that all about? Who cares? And those people who would care were out bowling anyway, or caressing their rifles. Every time someone decides to lay out a truth, hell is raised. Obama mentions that some Americans are bitter abut being left out of the loop and suddenly everyone's knickers are in a twist. Geraldine Ferrara is kicked out of the campaign because she made the mistake of reminding us that Obama is an African American. And, yes, I would like an elitist to be president for a change.

I have to admit that I got fed up rather early and switched channels to see who got kicked off "American Idol". Makes about as much sense as watching this farce. It has become apparent that both candidates had better just keep their mouths shut, because the ubiquitous media, in all its busy-ness, will be watching like a hawk, looking for anything to worry like a dog with a bone. (How's them metaphors for ya?) Any glitch will become magnified into something so significant, so egregious, that we will ignore what the axis of evil in Washington is doing. And John McCain may find himself the people's choice, or enough people's choice to continue the destruction of life as we know it.
Posted by Guenveur in Kent at 7:13 PM