The Opera as Farce 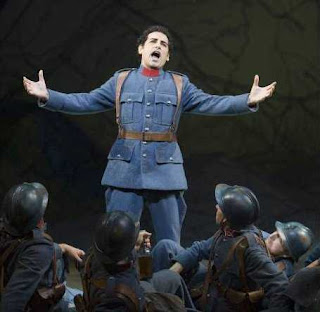 The last Met HD presentation was "La Fille du Regimente" and it was just wonderful. It's a bel canto comedy by Donizetti and the cast was full of great voices and great comedic performances. Lotsa laughs. The tenor, Juan Diego Florez is this Peruvian hunk with an amazing voice. I had heard on NPR that during the opening night at the Met, he had sung an unprecedented encore, and everyone was wondering if he would do it at the Saturday performance which was being telecast all over the world. It's the aria (Mes amis) which made Luciano famous because there are 9 high Cs, and Juan Diego hit them all perfectly. Well, he didn't do an encore Saturday, in spite of the fact that the audience at the Met and in the theater (and maybe other theaters) went nuts applauding and shouting, but he did do another unprecedented thing - he took a bow.

It wasn't just him, though. Natalie Dessay was the daughter of the regiment and she has a gorgeous voice and was extremely funny. They set the opera in the time of World War I, and she spent the whole first act wearing an undershirt and army trousers with suspenders and army boots. It was very much an old fashioned farce with a lot clever stage play. Everyone left the theater with huge smiles.

I know opera is an acquired taste, but there is something so magical about these programs that I think everyone ought to go at least once. The backstage interviews are a real treat. Watching the stage crew moving these massive sets around, hearing from the conductor, the set designers and others involved is really fascinating to me. You see these sweaty people and then they're on stage with their glorious voices - Wow! Next year they will be doing 12 HD transmissions, and while I won't get to all of them, I do look forward to some of my favorites.
Posted by Guenveur in Kent at 10:56 AM

I believe they show these at a movie theatre in Munich - I'll have to check one out. For that matter, I am ashamed to admit that I have never once gone to the fabulous opera house in Munich, either...you need to visit again and we can arrange to go together! Or we could just bop over to Vienna...