The Opera for People Who Hate Opera 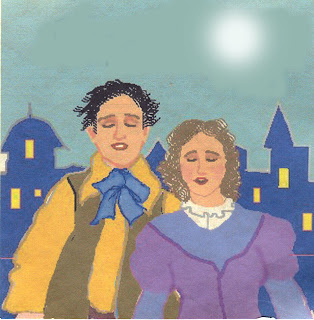 Last Saturday I went to the opera again, the HD version at a local theater. This time it was an old favorite, "La Boheme." That was the first opera I ever actually listened to. One Saturday afternoon many years ago, over the cracking of my father's peanut shells,(Every Saturday afternoon he enjoyed a sack of Planter's peanuts in the shell while listening to the Met broadcasts.) I heard this absolutely gorgeous voice singing the most beautiful song. "It's Jussi Bjoerling," my father said. "It's 'La Boheme'. Sit down and have a peanut." I did.
This production which I saw Saturday was really first rate. The tenor, Ramon Vargas, looks like a mini-Pavarotti and has a voice to match, simply lovely. The Mimi, Angela Gheorghiu, was a very sexy wench, even while coughing (you know she's doomed when she hacks a bit at her first entrance). Great voice. In fact the entire cast was an ensemble of wonderful voices.
Now there is no art that is so completely artificial as opera: ridiculous plots, sung dialogue, melodramatic acting. However, the music in this one grabs you by the throat. By the time Mimi is dying and coughing and singing, and Rodolfo is crying and clutching the little bonnet he bought her back in Act II, and the rest of the cast is sobbing ...well, I can only say that a lot of sniffling was heard throughout the sold-out theater.
A word about my father and tenors. I think he was a frustrated singer. I think in his head he was Jussi Bjoerling. He used to make fun of most of the bad ones, especially this one ancient guy who was still singing well into the forties. His last name was Martinelli and he sounded as if he had a noose around his neck which was being slowly tightened. My father would put down his peanuts and throw his head back and entertain us with his Martinelli imitation. They were both pretty irritating actually. Another one he hated was Lauritz Melchior, the great Helden tenor. That's a particular voice used in Wagnerian roles, but can sound like someone gargling when not done well. My father did the gargling kind whenever "Tristan" was on. Melchior had been very good, but he ended up in bad MGM musicals in the fifties, beaming and making the okay sign at reedy sopranos like Kathryn Grayson and Jane Powell.
The next HD opera will be at the end of April and is "The Daughter of the Regiment" and is deliberately funny. We were shown a preview from the London production. In that version Dawn French, "The Vicar of Dibley" played a non-singing role. Unfortunately she won't be in the Met version.
Posted by Guenveur in Kent at 6:30 PM