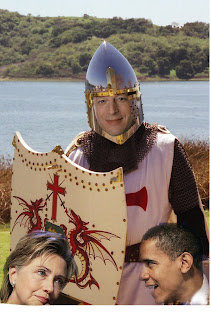 Okay, I've said it before and I'm saying it again: C'mon Al, step up now. My photo-shopped knight in shining armor is the best bet for the Democrats in November. Everyone I have asked in an exclusive survey has agreed" In a New York minute I would vote for him rather than the two who are currently campaigning." "You bet!" "He's the Man!" (No offense intended toward the non-man candidate.) "Sure." These are only a few of the positive comments I have received in this informal, but very thorough poll conducted among Democrats. (I do not know enough Republicans to ask. They are too busy forwarding scurrilous emails blaming the Democratic congress for the price of oil and the mortgage crisis.)
It has become apparent that Hillary has put her foot in her mouth once too often. How could you claim to have been shot at when your life is an ongoing TV show? I have found it offensive when people have accused her of lying, but she seems to have a loose relationship with the truth. The word "misspeak" became popular during the Reagan administration when they let Ronnie open his mouth without a teleprompter. I don't like to think we may be hearing it used again.
I also do not like some of the methods being used in her campaign, which smack of stale, out-dated old political tactics. I get the feeling that they are digging hard to find things to lessen Obama's reputation.

About Obama: Yes, he's a terrific speaker, is intelligent, is charming, is inspiring, has leadership qualities galore. We've been there before. I remember Adlai Stevenson, probably my favorite presidential candidate of all time, the only one whose speeches I actually listened to. Adlai, like Obama, was the choice of academics and educated folks. The rest of the people called him an egghead and voted for genial everyman(and war hero)Ike. Maybe people can accept smart after 7 years of terminally dumb, but every time my educated, liberal friends are enthusiastic about someone like Obama , he gets royally dumped in the general election. Americans like regular guys. Regular not too smart guys.

Now Al is very smart, too, of course, but I think he can win big over John McCain, who has that regular guy thing going for him. Al is already a winner, he's not the stiff the media has tried to paint him, he's an environmental hero (except to the flat earth folks) and above all, he is admired around the world and could mend the damage caused by the ignorance and incompetence we've suffered under for these past years. I could even see him bowling. Yeah, it would be another white male but it would also be a Democrat back in the White House and I'm not too sure we'll get there otherwise this time.
Posted by Guenveur in Kent at 11:39 AM

In my humble opinion the really SMART thing to do would be for Obama to ally with Gore. Obama has already stated that Al Gore will play an important role in his administration. Now THAT would be a winning ticket!!

I agree with you, Suzan. An ideal ticket.

I wish Gore would run, but he's made it pointedly clear that he won't enter this horse race. So we're left with a choice of a "Clinton Restoration" or a relatively green but eloquent Obama, who I still have some lingering questions about. (I was originally supporting Kucinich, but....in typical fashion, voters rejected him on the basis that they felt that he was merely "tilting at windmills" a la Don Quixote....sigh)

Obama's unwavering support of Israel, for one thing, and his opposition to gay marriage on the basis of religious reasons, smacks of pandering to the religious vote and has already alienated large portions of the BGLT community, from what I am hearing from my friends who go to the UU Church and are very vocal BGLT advocates. BGLT's call Obama a "bigot" where gay/transgender issues are concerned.

What's a shame, too, is that Gore only came out in support of gay marriage once he was no longer running for president. I'd love to see someone prominent have the cajones to support civil rights for gays during a campaign and prove that America really is the 'Land of the Free', but sadly, this may not happen in my lifetime.