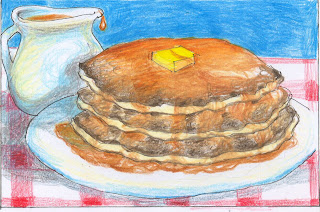 Last Sunday was the final pancake breakfast of the annual maple syrup season here in Northeastern Ohio. Every Sunday in March there are various venues where one can feast on pancakes and sausage smothered in local maple syrup. These breakfasts are run by volunteers who use the proceeds for community projects. Since this is the Western Reserve, many of our small towns have a distinctly New England flavor.
We have usually gone up to Burton in Geauga County, a town with a lovely village green on which is an operating sugar shack. Their breakfasts take place in the fire station which used to be an opera house. It is huge and the breakfast are run with amazing efficiency. Since it is not too far from Cleveland, there are always hordes of city folk, driving down to get their "country" fix, and the wait can take up to an hour or so, but no one seems to mind. If you go later, in the early afternoon, you can go right up to the big, sunny room where the volunteers lead you to one of the many tables. These are all-you-can-eat affairs, so people usually waddle when they leave.

This year we went to Shalersville which is a crossroads non-town without any charm. The breakfast is served in the village hall, a non-descript contemporary building. They are not so efficient as the Burton crowd but the food is even better. It is sponsored by the Goodell Maple Farm and everyone knows that their syrup is prime. We went early and didn't have much of a wait, but by the time we left, the line was out the door. Since it was the last Sunday in March, everyone probably realized that this was the last chance until next year. And we lost one Sunday to Easter (no offense to the risen Lord).

There is still plenty of maple syrup and maple candy available, of course, but until next year, we're on our own for a pancake breakfast. It's not quite the same. There are those who claim that Norman Rockwell's world never existed. Those people have never been to a Northeastern Ohio pancake breakfast.
Posted by Guenveur in Kent at 1:20 PM