Back to Mt. Hope Horse Sale 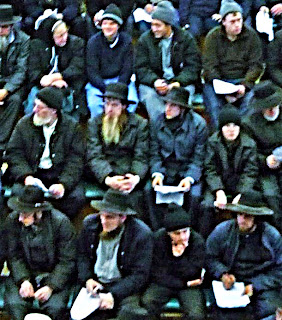 John read my post from last week and decided that a trip to was warrantedd. We went down on Saturday, which was a beautiful, sunny day. That area is one of my favorite rambling spots. is a few miles south of the , where my storytelling group met once a month. After the meetings, sometimes I would just roam around the hills and farms of the Amish communityand pretend I was in the 19th century, driving a 20th century gasoline powered vehicle.

We stopped first at the . I had not been there for almost two years, after being a member for over 25. I stopped going a couple of years ago when I was taking a pastel class which met on Saturdays. After that, Saturdays became too crowded with other things to do. I have missed it, of course, because I really liked the members of our storytelling group. We used to do two story concerts a year, drawing up to 150 people. That had slowed down a bit and we ended up with about 30 for each concert. I think a lot of people had other things to do, too. At any rate, apparently the interest in storytelling has dwindled, and I found out that the group had dissolved this past year.

I was glad to see Gordon, the director of the center and a fine storyteller himself. He’s a great guy and due to retire in a couple of years. He’s built the center into a terrific place for families. It’s right in the center of the Amish country, and they come there, too, and also help with the annual bird count every Christmas season.

We left the center and headed down to Mt Hope, to the horse auction. There was a huge crowd there. I found out that it was because of something called the Mid-Ohio; when dealers from all over the country bring retired harness racing horses down to sell to the Amish. I had not been there for probably ten years or so and it was great to be back. I love to watch them bring out the horses and run them back and forth to show off their form. Some of them were going for three or four thousands dollars. OF course they have bee groomed beautifully and their glossy coats and carefully brushed manes and tails just float like silk.

I asked a young Amish girl if she thought it would be okay for me to take a long distance picture. She said, “Of course. It’s all right.” It’s something I have wanted to do every time I’ve been t here because of the composition of the crowd. What is weird it this. The picture I did for the previous post was done from memory. When I got home and loaded my pix into the computer, I realized that my memory had not lied. You can see the similarity. Some of the men were wearing their straw hats instead of the black, but it’s the same picture, basically that I’ve had in my mind for a long tie. 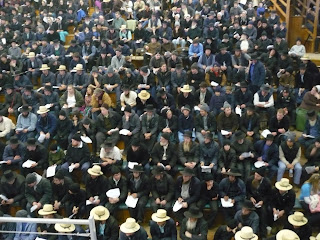 Posted by Guenveur in Kent at 8:36 PM

who are the young men wearing knit caps? Is that what;s allowed for teens?

You started the second paragraph of this fascinating missive with an account of 'stripping first'...I had no idea that Amish culture allowed such things!