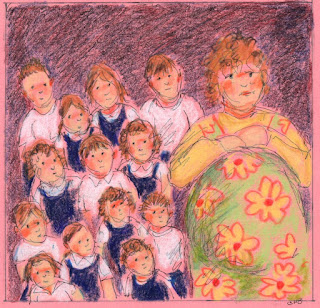 With birth control becoming an election issue (What is this, 1935 Massachusetts?) here in Ohio (tomorrow is Super Tuesday and Ohio is being hit hard with TV ads), there have been several letters to the editor in out little paper and in the Akron Beacon Journal which seem to have been dictated by the bishops, extolling the merits of Natural Family Planning. The letters have been written by men, of course.
My favorite talked about the “procreational and unitive” elements the sexual act, within marriage, or course. He writes of treating the act with dignity (As in, “Good evening, madam. May I possibly involve you in a beautiful, God-given right of sex tonight?”) Oh, yes, God is also a participant in this act, according to the author. Making God a voyeur is not my idea of a truly “unitive” kind of thing, when you have an entire trinity gazing on.
The writers of these letters call our attention to the papal Letters to the Faithful concerning the family and reproduction by Pope Paul and Pope John Paul II, those celibate experts on sex (between consenting adults), marriage and the family, child rearing and household management, in none of which they have had any experience (that we know of).
The letters insist that “Natural family Planning” is the only acceptable method of limiting the number of children. Well, I don’t know about that. It seems that if sex is to be “procreative,” and you only have sex during the cycle when the woman cannot conceive, you are subverting that all important “procreative” thingy. Of course, one of the writers does warn that NFP (I love that they have given it one of those snappy acronyms so popular with advertisers, like in the “ED” in Viagra ads) should only be resorted to in cases of serious health reasons, like fatal illnesses on the part of the woman, or whatever.
And the most important, most respectable part of this is that there must be SELF DISSCIPLINE!! And those who had a passel of kids just had no self control at all, none whatsoever. And no artificial contraception either, by gum.
Since the Church, as personified by the nuns in my day pretty much let you now that sex was a terrible, worse than murder kind of sin; even thinking about it meant a visit to the confessional lest you die in a state of mortal sin, I suspect that it was a miracle that anyone could relax and enjoy it. We were supposed to emulate the Virgin Mary, at leat up to a point. You couldn’t use the Holy Ghost as an excuse if you got pregnant. He was already taken.
To illustrate the economic impact of NFP, I have had my poor preggo above follow the Scarlet O’Hara Couture method of using found material for a dress, only she has used an old bedspread instead of velvet portieres.

NOTE: Do  not click on any of the highlighted words. I am still trying to figure out how they are getting into my posts. I have notified Google and Blogger, but they keep showing up. They are inserting links that I have not authorized.
Posted by Guenveur in Kent at 3:57 PM

I'm not seeing any highlighted words on my end, so it must only be visible on your end or something.

Yes, I have been amused by all these men writing letters to the editor extolling the virtues of what the Catholic Church teaches regarding natural family planning. Yeah, right, only have sex when you are planning on making a baby, otherwise, it's just gratuitous enjoyment, and by golly, that's a sin! I never did agree with anything they taught us in Catholic school. I think I must've been born a Unitarian Universalist to start with......

I'm so proud to have been conceived by you!

Amazing how simple it can be to communicate with people and have them understand a certain topic, you made my day.
Family Planning in Oxnard, CA

Thanks for sharing this great content, I really enjoyed the insign you bring to the topic, awesome stuff!