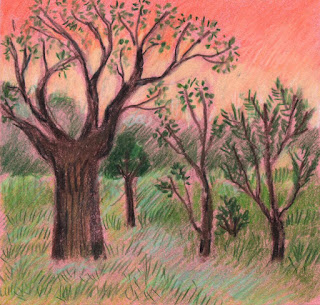 These past weeks, with the early spring, the view out my kitchen window reminded me of a favorite book I used to read to the children at bedtime, especially.


It’s the best bedtime book ever written, by Margaret Wise Brown, even better than “Goodnight Moon.”  It’s “The Little Fur Family" and the illustrations are by Garth Williams. The little fur child goes out to play in the wild wood and when he comes home in the late afternoon, this is what the sky looks like, and this is how the sky has looked on these chilly spring late afternoons.


This started me thinking about those days of reading to small children and the books, poems and stories they liked  the most. Each one had a different favorite. For Polly, when she was really little, it was the A.A. Milne poem “I want a soldier, a soldier in a busby,” from “When We Were Very Young.” She liked to hear it over and over. I actually found a wonderful metal wind up soldier in a busby, back when one could buy such things at the 5 and 10 for a coupe of bucks. He marched and played a drum, too.

For Sally it was “Whatever’s the Matter with Mary Jane (and it’s lovely rice pudding for dinner again..) which I think she identified with, even though I never made rice pudding. I think she liked the idea of a child saying “no” to food she didn’t like. They both liked the one about Bad King John who only wanted a red rubber ball.


Emily loved “Peter Rabbit,” especially the part where “the sparrows flew to him in great excitement and implored him to exert himself” when the buttons on his jacket got caught in the gooseberry net in Me. McGregor’s garden. She loved to say that part, even though I am not sure she understood exactly what it meant. Beatrix Potter did not stint in her use of language, giving children some respect in their ability to understand her stories as she wrote the.


John liked “Mike Mulligan and His Steam Shovel,” even though he had all the other books available. I had to read it over and over, as I had read the others’ favorites. When he was old enough for his library card, that’s the book he’d get out. One day the librarian showed him “Mike’s House,” a book about a boy who always called the library by that name, because that’s where the book about Mike Mulligan lived. John liked that one, too.


My early memories of being read to were of Peter Rabbit, poems by Stevenson and Eugene Field (“Winken, Blinken and Nod,” among others). And I wanted to hear them, over and over again too.


I am sure someone has done a dissertation or some sort of research study on why children love the repetition of the same stories or poems. Most of the ones my children liked I didn’t’ mind reading again and again because language was so well written and soothing. In the case of Margaret Wise Brown, there was an element of musicality to her rhythms and word choices. Reading her books was like singing lullabies. 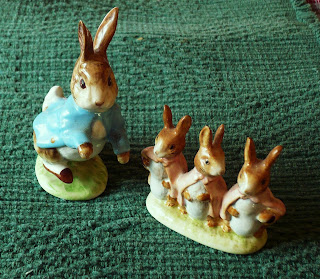 Posted by Guenveur in Kent at 4:55 PM

Sublime, both the drawing AND the writing! Thank you for giving us the love of books and good illustrations!

The drawing is a copy of Garth Williams illustration minus the little fur animal and the tree trunk house.Glad you like it.