A Day Out in Holmes County 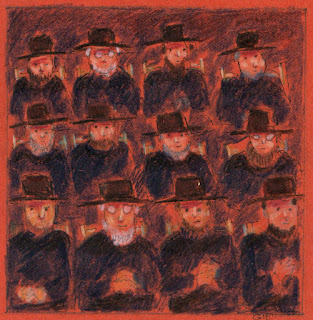 I watched the rest of the PBS program on the Amish. I had fallen asleep during the second hour when it was on last week and caught it last night on PBS World. It reminded me of another image that I had wanted to photograph but didn’t. In a little village called Mt. Hope there is an auction house. I used to stop there after the storytellers meeting at the Wilderness Center, which is just over the border from Holmes County. The Saturday auctions at Mt. Hope seem to be very popular with the Amish, mainly because there are these great hoarse for sale. The merchandise consists of retired trotters from harness races. As the auctioneer would say on presenting a beautiful, sleek specimen: “This horse is carriage broke and perfect for the ladies.”

I would go up to the balcony, where I could look over the crowd, and there would be so sea of Amish farmers, all dressed pretty much alike in the dark coats and black hats. Across from me on the opposite balcony would be the women and small children. Teen aged Amish boys would be roaming the building, acting like teenage boys everywhere, showing off for each other and the girls, who tried to pretend that they didn’t notice the boys. It was like an old fashioned country picnic. There was a little restaurant there, selling hot dogs, popcorn and homemade pie, along with soda pop. It was cheaper than the movies and a lot more sociable.

I used to watch the farmers, trying to figure out how they were making their bids. They didn’t use anything so modern as numbered paddles, but must have been making some sort of gesture known to the auctioneer. There were more than horse auctions there: livestock, poultry and farm equipment was also offered, but the horse sales were the ones I liked to watch.

I went down once to see an exotic animal auction and wished I hadn’t. It turned out that they were selling animals to stock hunting preserves, things like deer and pheasant. In this case, the Amish were the sellers, not the buyers.

The parking lot was filled with buggies and bored horses. These families had traveled from all parts of the county and it was a day long outing for the families. Sometimes I'd watch them heading home, usually with a couple of sleeping babies or toddlers, having had a day away from the usual hard work

If you see highlighted links, don't click on them.
Posted by Guenveur in Kent at 3:42 PM